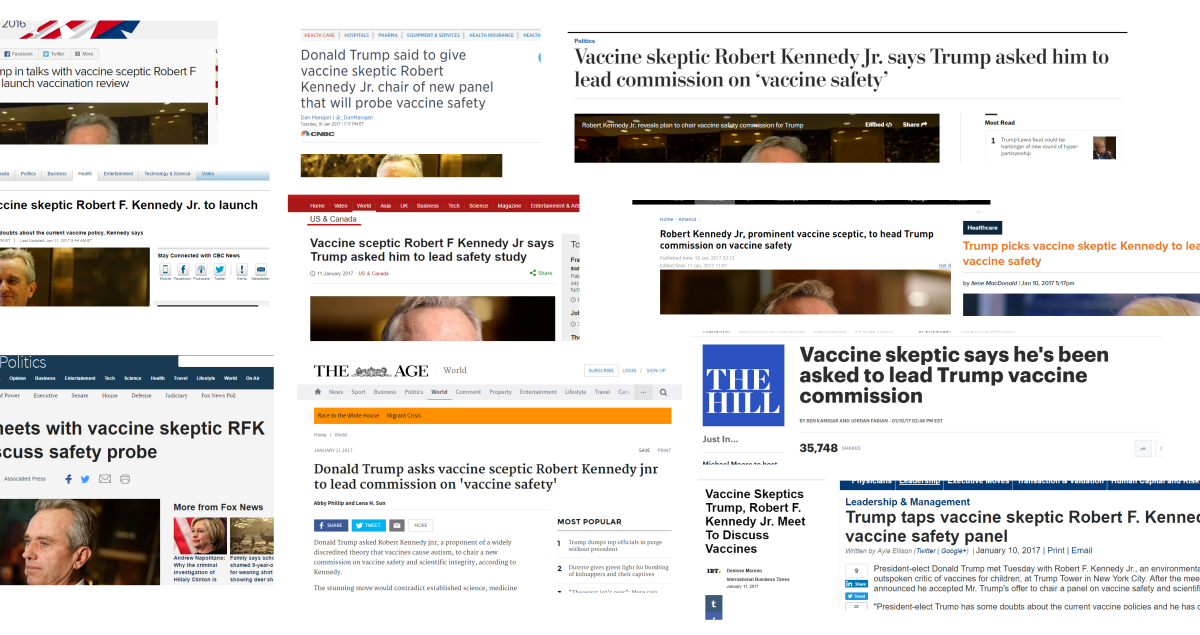 The people who thought Donald Trump’s pseudoscience agenda would manifest as mildly shambolic populism are now as freaked as everyone else, as he follows through with rare consistency on a view he first tweeted about in 2012:

True to his garbled, child-killingly idiotic words, Trump recently appointed an anti-vaxxer, Robert F Kennedy Jr, to chair a commission on vaccine safety. Trump hasn’t taken office yet, and his transition team issued a statement claiming no decision has been made. Regardless, it’s a taste of things to come.

It’s hard not to feel a little helpless. But, one thing we can influence is how Trump’s actions are portrayed in what’s left of the real world. Yet even in this, where efforts can be made to inform others of the magnitude of appointing such a dangerous person to such an influential position, opportunities are squandered. The headlines:

The vast majority of headlines about Trump’s decision label Kennedy a ‘vaccine skeptic’ – with a rare few choosing to use “Anti-Vaxxer”, “Vaccine critic” and “anti-vaxxer advocate”, which all hit the target with significantly more accuracy –

The ‘skeptic’ label that’s been plastered all over this news is horrifying. The anti-vaccination movement is an organised effort that leads directly to an increase in the death and suffering of children, and this new trend enables and softens those who stand at its helm.

To illustrate the magnitude of this misnomer,  when promoting a conspiracist anti-vaccination film, Robert F Kennedy Jr told the audience that:

“They get the shot, that night they have a fever of a hundred and three, they go to sleep, and three months later their brain is gone. This is a holocaust, what this is doing to our country.”

The core of Kennedy’s statements on vaccination stem from communicating and advocating an opposition to vaccination, rather than a slow, calm and deliberative process of skeptical assessment of evidence.

He thinks vaccination is akin to the holocaust. This is not the outcome of skepticism. It is utterly insane to describe him as a ‘skeptic’. It is a recent, deadly tribute to a horrible and commonplace assumption: that there is no harm in placing a platform underneath and handing a PA system to advocates of harm.

The history of scientific misdescription insanity

Previously, the lobby groups and individuals opposing vaccination have been referred to as ‘anti-vaxxers’, ‘Anti-vaccine activists‘ or, (perhaps confusingly), ‘anti-vaccination advocates’. Google trends, which shows relative search volume over the years, illustrates the dominance of the term, compared to ‘vaccine skeptic’: 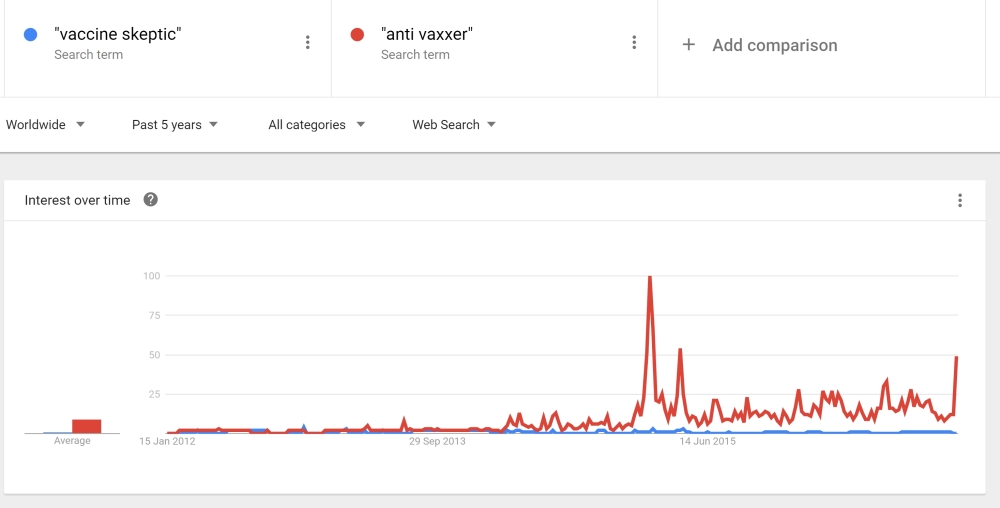 News of Robert F Kennedy’s appointment resulted in a spike in relative search volume in the past seven days – but unlike the chart above, the two terms are on equal footing in terms of what people are searching for in response to articles:

Digging into older descriptions of Robert F Kennedy Jr, a couple of articles do describe him as a ‘vaccine skeptic’, but none feature the term as a descriptor in headlines:

“When he addressed the audience at a screening of a documentary on the subject, Trace Amounts, in Sacramento last week, the high-profile vaccine skeptic made remarks that set off a firestorm of protest”

Misnomers play an important role in encouraging concerned parents to let their guard down. The “Australian Vaccination Network” sounded innocent enough, but their organisation is predicated on fervent opposition to vaccination, with little regard for scientific consensus. They were forced by NSW Fair Trading to change their name to the “Australian Vaccination-Skeptics Network”. The judge stated:

This is better than their original name, but the statement is deeply contradictory – as then-president of the AMA said, “I would have preferred if it was ‘the anti-vaccination network’, which is well and truly what it is”. He’s right – being opposed to something isn’t the same as being skeptical about it.

More recently, a group named “Health Australia Party” (originally the ‘natural medicine party’) ran for the 2016 federal election – sounds fine, right? Well, yeah. You guessed it. Their party position is anti-vaccination – something they’d almost certainly lose votes for if they were open about it in their naming.

The act of rejecting the science of climate change, along with the people who collectively do this, have been through a process of hand-wringing when it comes to media descriptions. The difference here is that this particular pseudoscience bears the benefit of a strong and incredibly well-funded public relations support, in particular from the US – the ‘climate skeptic’ branding effort stuck from the outset, and ‘climate denier’ fell to the wayside. As the Committee for Skeptical Inquiry pointed out,

“As Fellows of the Committee for Skeptical Inquiry, we are concerned that the words “skeptic” and “denier” have been conflated by the popular media. Proper skepticism promotes scientific inquiry, critical investigation, and the use of reason in examining controversial and extraordinary claims. It is foundational to the scientific method. Denial, on the other hand, is the a priori rejection of ideas without objective consideration”

An open letter from prominent scientists and skeptics pleaded with the media not to use the term ‘skeptic’ when describing those who reject climate science outright, but the name has stuck, and the subjects of the descriptor themselves angrily demand to retain the ‘skeptic’ in their collective nomenclature. The Associated Press’ style guide rejects both, stating that:

“We are adding a brief description of those who don’t accept climate science or dispute the world is warming from man-made forces: Our guidance is to use climate change doubters or those who reject mainstream climate science and to avoid the use of skeptics or deniers”

It’s still ridiculous. The act of creating a belief system that is 100% immune to the impact of any carefully verified scientific evidence is denialism, not ‘doubt’ or ‘skepticism’. The act of asking for evidence is in no way similar to the act of creating a global engine of angry, dangerous and mean-spirited antagonism towards evidence. The conflation of these two has had disastrous consequences for climate science, and consequently, disastrous consequences for the atmospheric system that sustains our existence.

The primary function of pseudoscience advocates shares no common DNA with skepticism. For most practitioners of professional wrongness, there is no quantity of scientific evidence, scientific consensus or confluence of independent lines of evidence that would result in the switching of their views. For both vaccination and climate change, any genuine skeptics would acheive the criteria for acceptance of science early on, so strong is the evidence in both these areas.

The re-branding of vaccine science denial as a collective act within the world’s media outlets is weird and terrifying and the consequences will be serious. This isn’t petty back-and-forth marketing-gripes between equally-correct factions. This is potentially deadly.

Donald’s Trump administration will see the emergence of weaponised, violent pseudoscience. Between 1994 and 2013, vaccination prevented 322 million illnesses, 21 million hispitalisations and 732,000 deaths. The technology works amazingly well, as the visualisations below from the Washington Post illustrate:

Drop the ‘skeptic’ – it puts readers off guard, and it clears the path for a Trumpian juggernaut of pointless suffering and death. This is something we can do something about. So do something.