Racism manifests in Australia’s media outlets in very specific ways. These are not immediately obvious to many, which means you have to carefully and patiently spell out exactly how and why waves of xenophobia rise in the industry. I’ve written about a few of these, before.

Pauline Hanson, a racist Queensland politician was elevated back into power through paid slots on morning TV. The flood of support for her was attributed to economic anxiety and employment related dissatisfaction, rather than racism. It made me frustrated. But the role of media in her rise was barely discussed.

For just over one year, engineer and author Yassmin Abdel-Magied was targeted by News Corporation outlets (she’s Muslim, which played a big part) for suggesting Australia’s yearly war commemoration address other issues too, in a seven word Facebook post. The duration and scale of this was incredible, and I quantified in these three posts.

It was defended passionately by Australian journalists at the time as ‘reasonable criticism’, but it was blatantly hyper-reactionary. It relied heavily on traditional media creating signals and guides for social media flocks to attack Abdel-Magied through comment, email, SMS and physical campaigns involving abuse and death threats.

Ditto for the ‘African gangs‘ campaign, in which conservative and progressive media outlets engaged in de facto partnership with the Liberal Victorian political party to create a fabricated narrative of African immigrants bringing a crime spree to Australia.

The ‘Apex gang’ mythology dominated news stories, statistics were twisted, and as usual, there was an immediate human cost. Much of it relied on creating a separate tone and intensity for reportage of stories that related to Black Australians, which I characterised as ‘Race tagging‘:

These campaigns, which rise and fall over months and years, badly hurt many Australians. They are never truly understood in the context of the skewed, ethnicity-based tuning of reaction scale. They are heavily reliant on a large, social media-using audience that’s happy to pay for subscriptions if it creates written justifications of their xenophobic desires for verbal and, potentially, physical violence.

It’s bad, and it’s getting worse.

The pandemic has intensified the people-harming habits of this industry. A heavy reliance on racist sentiment overjoys white readers and the mostly-white employees and owners, but it disproportionately hurts non-white Australians.

The pandemic is a five kilo brick of magnesium dropped into a racist fire that’s been burning for decades.

First, anti-racist protests erupted around the world in June, and media outlets immediately began a multi-staged process of linking them to the spread of coronavirus (racism and disease have a long history). Australia’s Black Lives Matter protests were, both in parallel and serial, presented as:

I wrote about this here and here in plenty of detail, including comparisons to an anti 5G protests that drew no such response. These gatherings, despite stringent infection controls and a total absence of any spikes anywhere in the world due to protests, were blamed unceasingly by a range of media outlets.

Since then, the efforts to ‘link’ people who attended BLM protests with new clusters has slowed, but kept going. News Corp columnists attempted to widen the net, by simply blaming multiculturalism or an inability to speak English:

This whole pandemic has been used at *every* opportunity to fan racism.

Then it was multiculturalism, in its entirety.

Yet the Courier Mail and its defenders claim, with a straight face, race isn't remotely relevant to their front page today. Please. pic.twitter.com/JfSkwNLujP

Yesterday, News Corp’s Courier Mail newspaper published the names and full-front-page faces of two Australian teenagers, who evaded border control measures to re-enter Brisbane after having been in the COVID-hit city of Melbourne. They and one other were all infected with coronavirus, and their movements in the city have sparked a frantic testing surge to ensure no outbreak in Queensland.

Eventually, their faces, names and long clips from their Instagram feeds were spread across most of Australia’s media outlets, with the exception of the Guardian. The Courier Mail’s headline was the most direct effort to draw attention to their race: 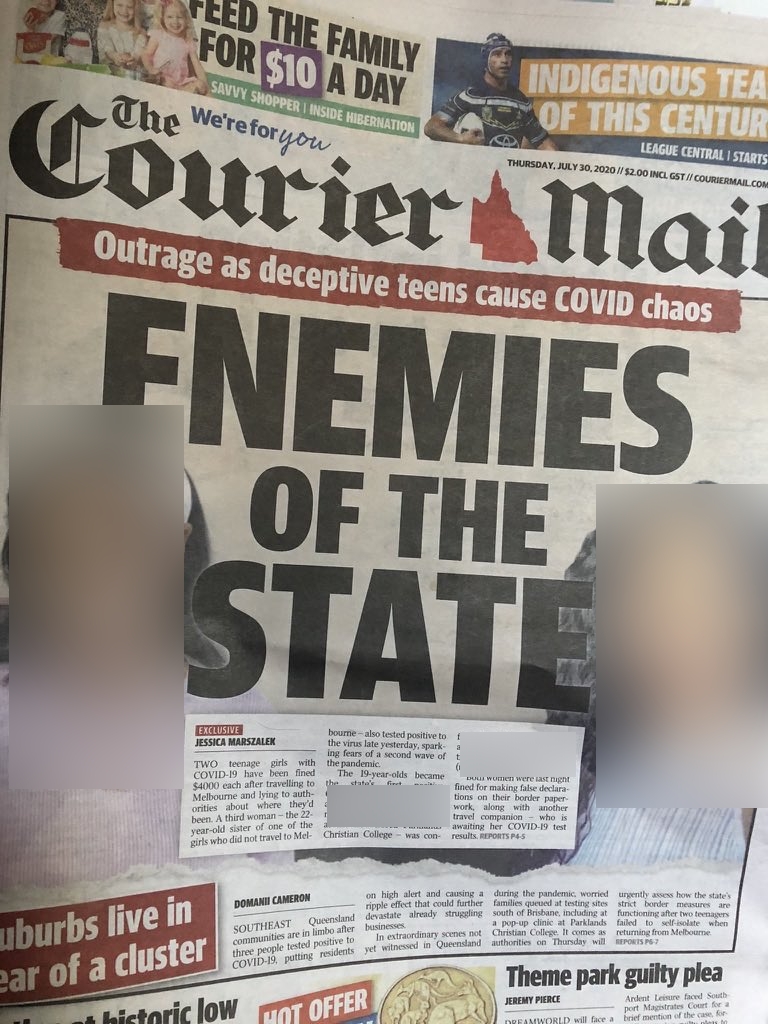 This is a combination of many things we’ve already seen. The tuning of reaction intensity based on ethnicity is clear. There are several instances of clear wrongdoing by a range of others breaching coronavirus control protocols, and none have featured such blatantly signals to inspire a racist response. In fact, nearly all have avoided the names and faces of offenders, save for those who have recorded and posted their own wrongdoing to expand their social profile, such as Bunnings Karen.

In one particularly telling case, an Australian couple in Aspen who breached quarantine and attended parties had their identity protected “for legal reasons”. No such concerns in the Courier Mail’s case.

Hi @bencubby, just wondering why one couple got privacy 'for legal reasons' while these teens have effectively been doxxed in the SMH? pic.twitter.com/sUXiuOljq9

This – exactly this – is where racism hides. These double and triple standards are hard to track. A few people try hard, (that’s not an exhaustive list, there are many more) but it takes effort, good memory and it kills so much valuable time.

It is also worth pointing out that campaigns have, in the past, focused heavily on criminality. Australia’s COVID19 response has been to criminalise all behaviour that might spread of the disease, instead of encourage lasting, sustainable and deep-set cultural change. This public health approach has been enforced by people with little machines strapped to their hips that fire metal into vital organs – police officers. When restrictions are lifted, we snap back to normal, instead of creating a longer-lasting behavioural protection, which leads to more cases, and more restrictions.

More criminality means a wider net for racist media campaigns. And when they catch prey, they feast. In this case, the Courier Mail knew that framing these people as foreign enemies of a sovereign land would spur the reaction they wanted. And they got one hell of a reaction.

On social media sites like Facebook and Twitter, the emotions experienced by the people who consume traditional media – like News Corp’s papers and outlets – is expressed freely and honestly. Half-arsed attempts to curate comments sections on Facebook exist, but the racist intention of the decision to name and shame the two Queenslanders comes into sharp relief when you actually read the responses.

I’ve collated a tiny fraction of them here, but below are a small selection of a range I saw and extracted using a scraping tool. These are from a Sky News Australia clip, posted by Senator Pauline Hanson on her Facebook page:

On Hanson’s single Facebook post, there were 222 comments suggesting deportation. 33 explicitly mention ‘Black’, 15 mention ‘African’. “Time to deport them and their families back to the third world shit hole that they came from cultural enrichment my ase”, said one commenter on the Daily Mail’s Facebook page. “Baboons can’t talk silly”, said another. The sheer quantity of these comments is overwhelming.

I 100% get questioning the ethics of publishing their identities. But making it about race? Give me a break. These idiots would've copped it regardless of their skin colour

We already know what they would have copped, if they were white. We wouldn’t know their names, and we wouldn’t have seen their faces. A blogger named Eve Black repeatedly flouted the rules, and I can’t find a single comment calling for her to be deported, or described using racist slurs. No one is debated her ancestry or ethnicity, and she hasn’t been referred to on the front page of a newspaper as a foreign enemy.

Eve Black, a White woman, posted a video of herself crossing the border and evading police, who allowed her to pass without complying with their orders. She tried it again and is only now facing multiple charges

This harks back to the days of the campaign against Yassmin Abdel-Magied, in that these media outlets are intentionally trying to signal the ire of a flock of social media racists, who comprise a major proportion of their readership.

If they did not, there would probably be a greater effort to remove defamatory, abusive and extremely xenophobic comments from their sites and Facebook pages. This financial and emotional symbiosis means vicious abuse thrives. And it hurts.

Public health protection through racist media abuse is probably not that great, hey

What is very clear from this is that any new cases in Queensland over the coming month – regardless of their cause – will be placed directly on the shoulders of these two nineteen year old girls. Beyond whatever punishment they receive for their wrongdoing, they are now both at severe personal risk for months, probably years. Several comments on pages such as LadBible Australia directly call for the execution of the two women, or threaten to kill and harm them.

This is the new goal, then. If you’re not scared of fines and jail, you should be scared of ten thousand violent racists, each vying to hurt you badly. Break the rules, and a media outlet will raise their bat signal to the clouds to summon them. Now there’s a pure, true-blue Queensland public health initiative.

“Already we have seen comments to ‘deport them’, ‘send them back to where they come from’, and worse, alongside appallingly hyperbolic coverage from some media outlets branding them with terms usually reserved for people accused of treason and other high-level crimes. Pictures of their homes have allegedly been posted to local residents’ groups on social media”

Please also note that it won’t just be the teens who suffer. Every Black African in QLD will know that they’re no longer safe from public abuse because of this. I’m not even in QLD and I’m already weary about walking around.

The Courier Mail’s editor defended his actions: “This is a very real, serious public health issue, and people have the right to know if their life has been unwittingly jeopardised”.

You can know that your life has been jeopardised without knowing the name and face of the people who did so. It has worked this way for months already. Every breach prior has preserved privacy – highlighting danger without triggering a pile-on. What the editor, Chris Jones, is really saying here is that people have the right know when an ethnic enemy played a role in that, and he has a right to soak up subscriptions from froth-mouthed racists that result.

The Courier Mail have kicked off a brand new public health campaign. It is born of their own instincts and their own imagination, and it is as hideous as you might expect.

The media shaming of people breaching coronavirus control orders on the grounds of whether their racial characteristics will create click revenue for dying media outlets is, obviously, going to make everything worse. People will be more likely to evade detection, knowing their details will be leaked by gleefully bigoted government officials and that the death threats and abuse will ensue, from media outlets and their Facebook comment armies.

This is a dark and terrifying development. COVID19 has significantly intensified racist campaigns in Australian media outlets. These campaigns have been hand-waved away from years, but now they’re liable to hurt significantly more people than usual.

There’s still a chance to pare it back, but it means louder and more frequent criticism from within the industry. This blog won’t change them. Your tweets won’t change them. The voices of other white journalists are the only voices that are heard – it was only a few months back that The Age walked back their insistence that ‘slavery never existed’ in Australia, based on an internal revolt.

Turning this around matters a lot. A lot of lives are at risk, and one of Australian media’s oldest and worst habits is fast becoming a serious threat to everyone.