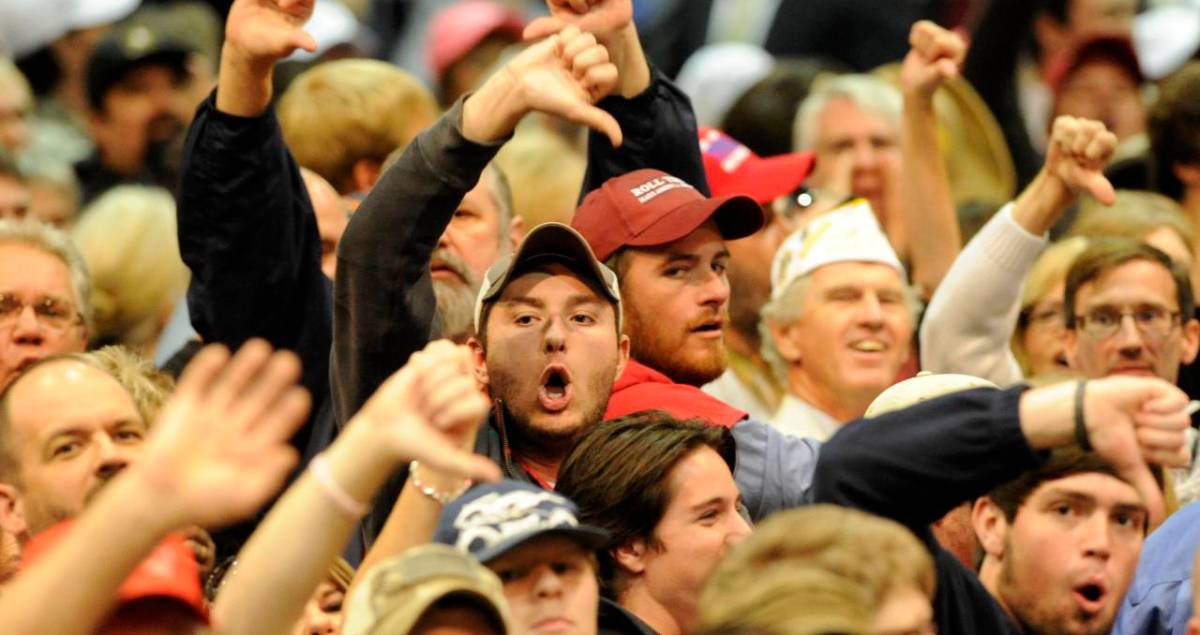 You don’t have to go far back in time to surprise your former self. For me, mid-2014 would be sufficient. If 2016-Ketan told 2014-Ketan that Donald Trump would be the near-certain presidential nominee for the Republican party, in the 2016 US presidential election, 2014-Ketan would have assumed that he was experiencing a profoundly demented hallucination and he would have jumped into the nearest body of water in an Inception-style attempt to return to reality.

Donald Trump exemplifies something we need to talk about – a figurehead with a sizable platform, pushing discourse and behaviour in a certain direction. Empowering the tail end of something, by moving the middle. Let me explain.

It’s tempting to think about writing in a relatively single-minded way – you have an audience, and you want to inspire a feeling, or a thought, or an attitude. But, some people don’t have a small or specific audience. Some people have a gigantic audience, and through sheer mathematics, they’re going to inspire a range of responses when they say a [thing]: 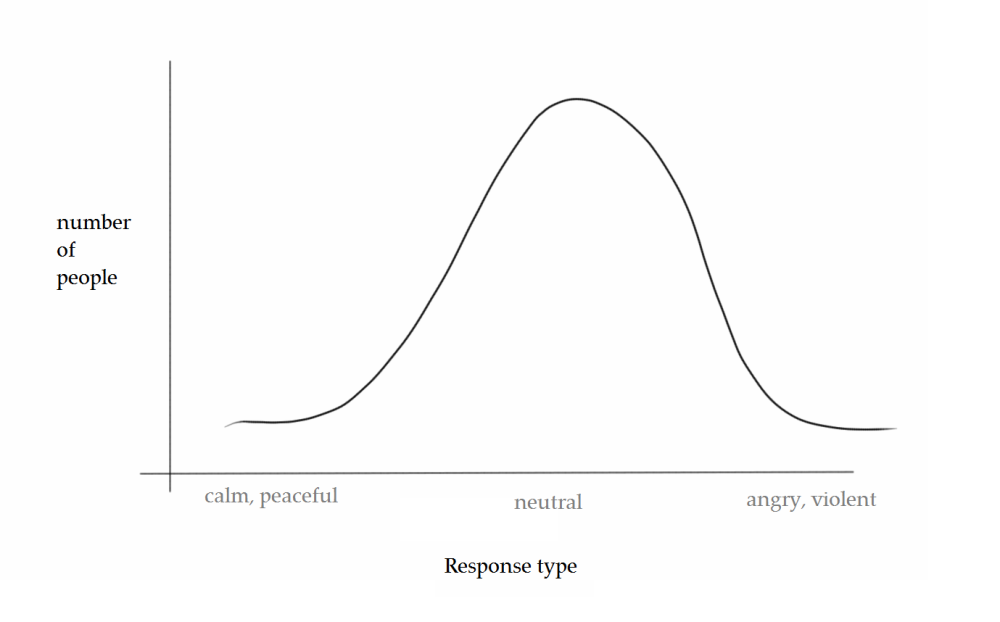 Donald Trump’s speeches and campaign events have been increasingly marred with violence, spurred and encouraged quite directly by Trump himself. When Trump says “I’d like to punch him in the face” about a protester at a rally, he’s shifting the standard response curve:

Compare it to how Obama deals with protesters – how do you think it shifts the response curve?

My bet – it shifts the curve this way: 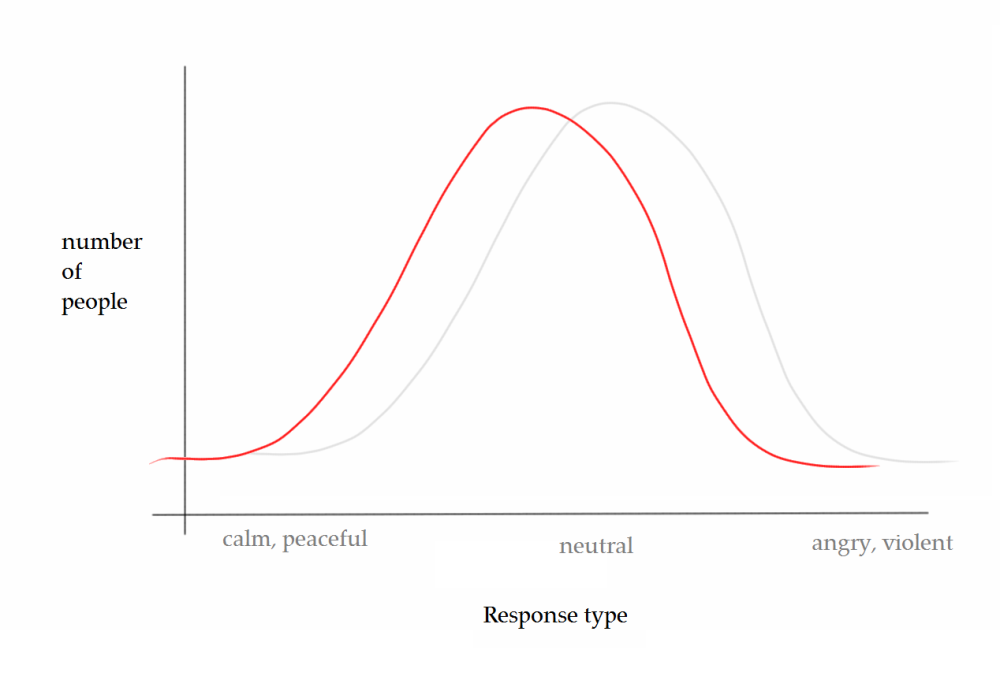 This probably doesn’t seem all that surprising, but it’s important to visualise it this way, because Trump’s approach causes some endlessly circular arguments:

“No he’s not, the things he says do not encourage violence”

“But…..people are violent at his rallies”

“He doesn’t advocate for it-”

The pattern repeats ad-nauseum. Response-curve-shifting is Trump’s proxy for transforming American political discourse into an ugly, pugilistic arena of violence and cruelty. Trump also relies heavily on the psychology of crowds, as discussed in Wired Magazine:

“The rhetoric of the rallies, then, both reinforces and amplifies those feelings. People feel empowered to defend the collective—like the Trump supporter who sucker-punched a protester being led out of an event. “They are not hitting the person because they have a history with the other person. What they are doing, in a perverse way, is they are acting for the group,” Reicher says. “It’s a very dangerous cocktail.””

The aim, with this technique (known also as “dog whistling“) is to push the response curve to the right: to catalyse the worst people, and include them in the broader response. Pushing the thin end of the response curve into the red-zone, into an area filled with violence and hatred, doesn’t have a large impact on general views, but it does have a series impact on individuals. Let’s consider some examples.

Over the past few weeks, conservative MPs, the Australian Christian Lobby (ACL) and a specific news outlet have run a campaign against a government anti-bullying program that they perceive to be some sort of ideological trojan horse for a ‘homosexual agenda’. They collectively claimed victory on Friday the 18th, as changes were put through to the program.

There’s a collection of broader political aims at play here. Part of it is creating a shift in tone, prior to a planned public vote on marriage equality. Opponents of changes to the marriage act seem to consider hate and vitriol a viable tool for adjusting public opinions on this issue, and they’ve begun shifting the curve in this direction:

Recently, a group called ‘STOP SAFE SCHOOLS COALITION’ tried to sabotage a same-sex high school formal by buying up tickets (which backfired – their actions inspired a hugely successful fundraising campaign to support the kids). The group isn’t associated with the Australian Christian Lobby, which is an important point – they’re responders, acting of their own accord. But they’re responding to a shift in rhetoric created by more reserved groups, such as the ACL.

Public support for marriage equality is at its highest level in five years. I don’t think the push to shift the ‘response curve’ into ugly territory will have much impact on broader public views – the audience isn’t big enough. But the real impact is on individuals – teenagers and kids who are deeply vulnerable to vitriol.

It’s been some time since climate science and climate denial dominated media discourse. The topic seemed to peak in 2009, though 2015’s Paris climate conference saw a brief resurgence: 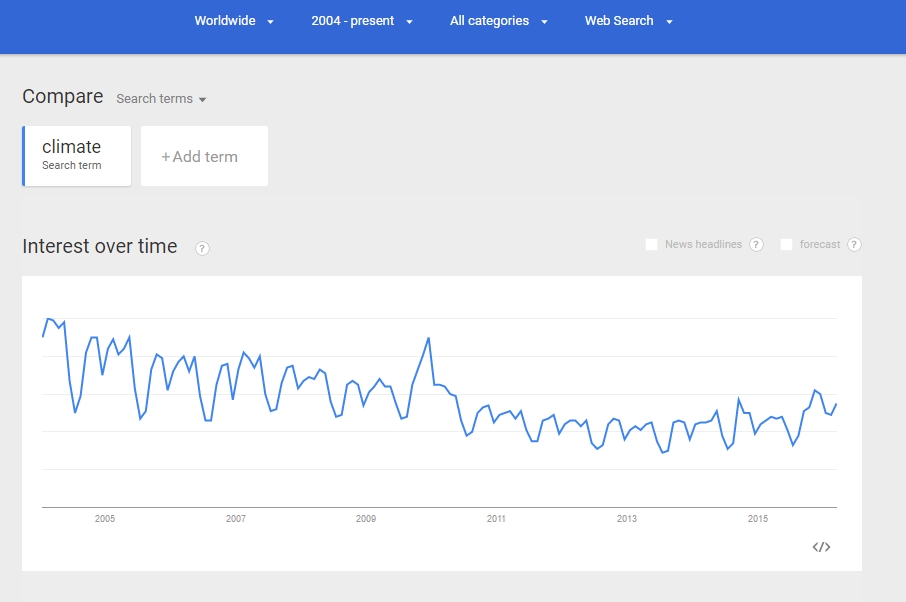 Denialism’s heyday is peppered with examples of attempts to shove the response curve in a ugly direction – these were truly vitriolic, and resulted in a slew of death threats and threats of physical harm being directed at climate scientists:

Australian media outlets were curiously eager participants in this. The Australian published several vitriolic opinion pieces, including one implying that a death sentence ought to be issued to climate scientists, and others directly stating that the wind industry was akin to a paedophile ring. I’ve been the target of fierce racist abuse from an anonymous anti-wind farm site for some time, alongside general death threats directed at the wind industry:

It didn’t work. Like acceptance of marriage equality, acceptance of climate science is also at its highest level in quite some time. Support for the wind industry has always remained strong. Again, though, the impact was still real: individuals were scarred by the vitriol and hate ejected as part of this effort to shift the response curve towards hate and anger.

Vitriol is powerful, but it has no stamina.That’s why the push for marriage equality persists, why public opinion continues to creep closer to scientific views, and why people are mostly still okay with wind energy.

This is outlined fairly neatly in a recent editorial in the New York Times, with regards to Donald Trump:

“..the proper thing to do in the face of demagogy is to go the other way — to make an extra effort to put on decency, graciousness, patience and humility, to seek a purity of heart that is stable and everlasting”

I think we underestimate the need for this. Sure, this tactic doesn’t alter the momentum of public views, but it still has a human cost. People are being pummeled by Trump supporters, who are driven by Trump’s remarks. LGBTQI kids are six times more likely to attempt suicide and self-harm than their peers, and same-sex attracted Australian have fourteen times higher rates of suicide attempts than their heterosexual peers.

The dilemma is that pushing back against the shifting of the curve requires decency, patience and kindness – emotions which don’t burn with the same intensity and immediate ferocity as the hate deployed in the campaigns discussed above. Perhaps the solution is simply to persist: to never bow to the standards created by demagogues. But people are quickly hurt (quite literally) by the response-curve-shift, so this slow-acting approach seems necessary, but insufficient.

Taking negative campaigns and converting them into positive initiatives is brilliant, I think. The fundraising campaign for Minus18, inspired by the ‘Stop Safe Schools Coalition’s hateful actions, raised almost $50,000. It’s not the whole solution, but it’s a wonderful proof of concept: positivity and kindness can burn with the same intensity as hate, catalysed by social media and digital tools.

There’s hope. I don’t think challenging the harm being created by someone like Donald Trump is impossible. It’s hard, but there’s probably a way.