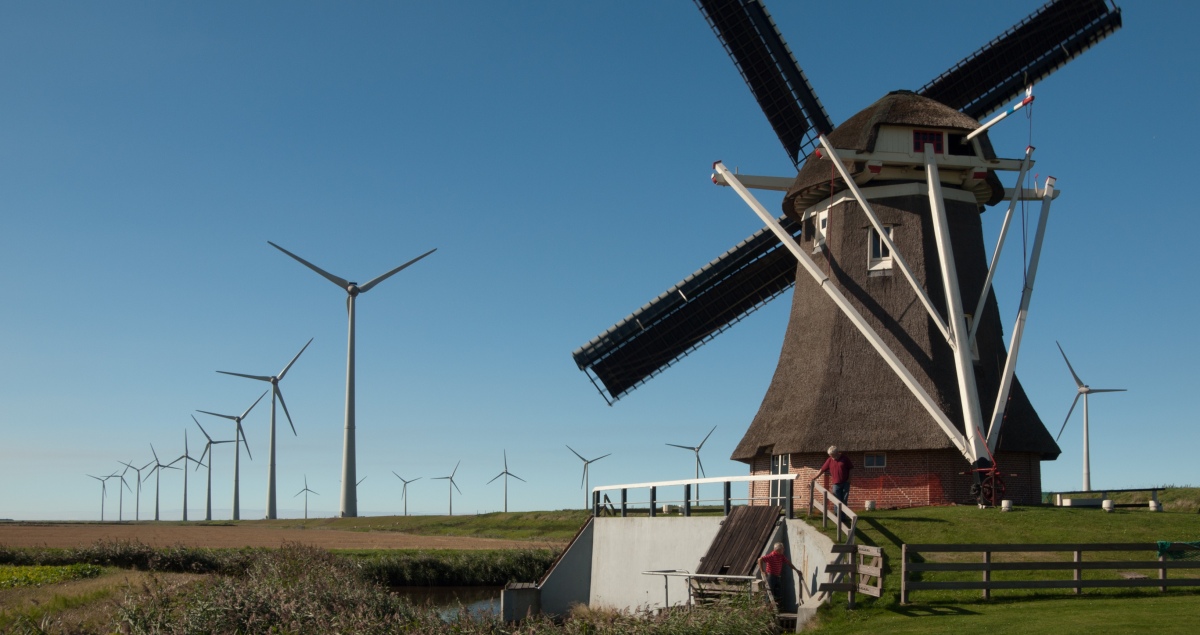 Okay, who said this? Whoever it was, it isn’t true, but it seems to be the standard by which any action taken to reduce carbon emissions is judged. The difficulties that we’re encountering, and are destined to deal with for at least the next five decades, are compulsory, not optional. Pointing out the challenges of replacing an ageing, emissions-intensive fleet of thermal power stations is fine – what’s optional for us is whether meeting these challenges is done through accurate, level-headed and science-savvy discourse.

At the time of a blackout in South Australia last year, caused primarily by a major storm, the ABC’s political editor, Chris Uhlmann told viewers that:

“40% of South Australia’s power is wind generated, and that has the problem of being intermittent – and what we understand at the moment is that those turbines aren’t turning because the wind is blowing too fast”

The 730 program repeated it later:

“South Australia gets 40% of its power from wind power but that is intermittent and on days like today, I understand, the wind power wasn’t operating because of the storm. That then put more pressure on the rest of the system. Is that a fair assumption for us to make?”

This was wrong: the fact wind output varies over time had no contribution to the sequence of events, which went something like this: 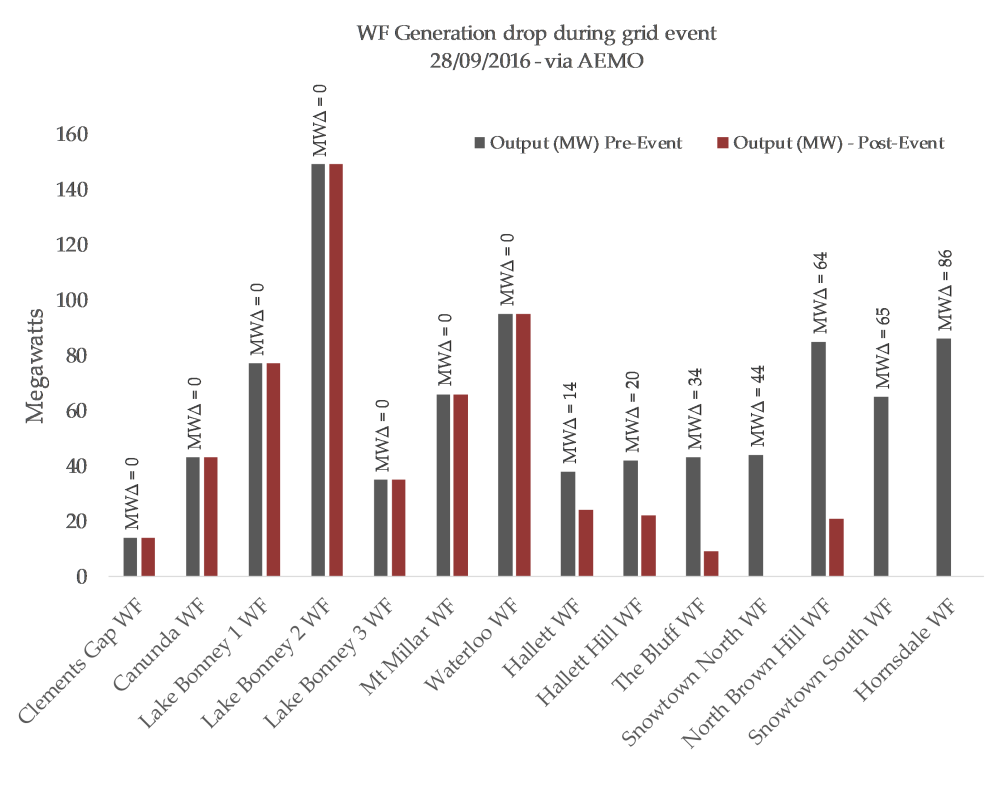 Wind’s role in the sequence of events turned out to be genuinely unremarkable. The varied  and deeply boring details of voltage ride through settings on modern wind turbines doesn’t slot neatly into the breathlessness of the original claims.

In fact, in 2005, the trip of Port Augusta, a coal-fired power station in South Australia, blew the interconnector due to a similar sequence of events. But reporting on that incident was significantly different, with the blame laid on the interconnection failure rather than the technology that disappeared from the grid.

AEMO’s most recent update in December 2016 outlines this in more detail. The immediate error showcases something important: being clear headed on this issue takes time. Misinformation delivered during the event will surely stick with greater adhesion than corrections or reports delivered weeks later.

“There were grave inaccuracies in Chris Uhlmann’s reporting of the South Australian blackout, and those inaccuracies leached into the ABC’s broader coverage….political considerations appear to have trumped sober assessment and diligent factual reporting of a complex policy issue”

The consequence of whatever invisible force is pushing the dominant framing of these stories towards politics and false balance rather than patient engineering and science is simply that major factual errors emerge and replicate within minutes of major system events.

It’s now several months since the event, and little has changed. Technical issues are still being presented as purely political, with nowhere near enough regard for the technical nuances of a giant webbed ecosystem of weird, big, confusing machines.

“The end of fossil fuel generation in South Australia would be a cause for celebration if wind and solar could be relied on to deliver power all the time, but they can’t. Research by the Australian Energy Market Operator shows that wind farms deliver their advertised capacity for about 35 per cent of the year”

Here’s the important bit: this doesn’t mean that your car was travelling at 250 km/h, sixteen percent of the time. If anything, that’s a bit of an oversell, right?

With regards to wind, Uhlmann’s saying wind farms were at their “advertised capacity” (“Advertised”? Really?) for 35% of the year is also an over-sell. The chart below shows the total time South Australia’s wind farms spent at different megawatt output levels, as a percentage of total time, for 2015 and 2016: 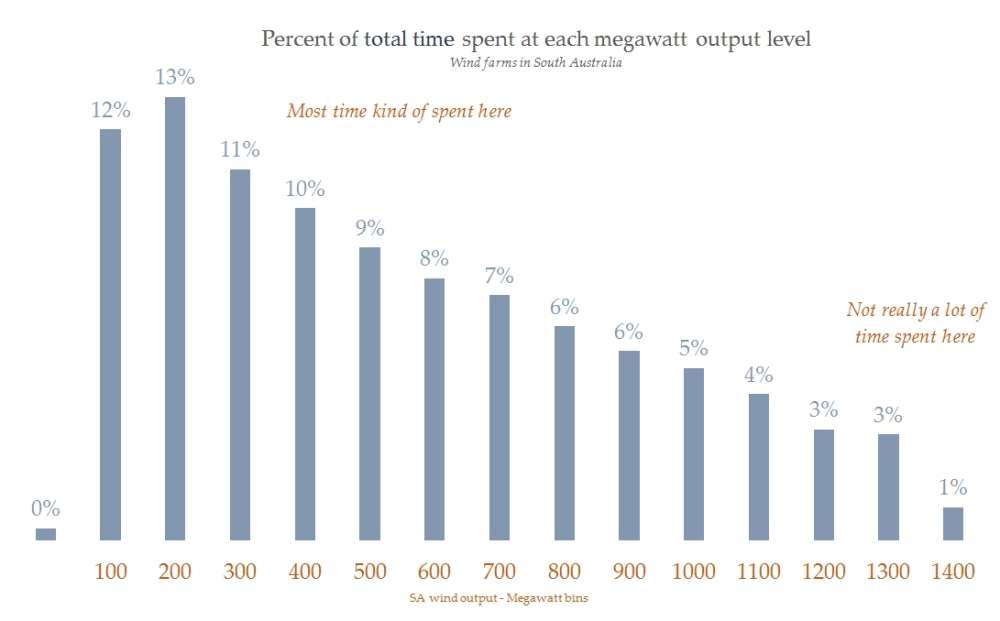 Wind output spends the bulk of total time at the lower end of total installed capacity. This is precisely what you’d expect – wind turbines are purposely ‘overbuilt’, because there are rare but important times when winds are high that are well worth capturing, but that don’t happen all the time. Wind spends almost zero percent of the time at maximum (‘installed’, or as Uhlmann might say, ‘advertised’) capacity – if it did spend too much at or near top speed, it means you’re using the wrong machine to capture and convert wind energy.

Think of this as the ceiling in a room – you spend most of your time in the lower half, but there will be times you need a higher ceiling (moving a ladder through the lounge room) – so you ‘overbuild’. Bumping your head against the head ceiling wouldn’t be something to be happy about – it means your ceiling should be higher.

Despite wind energy spending a big chunk of time at lower levels of power output, when you tally up the total amount of power output over a long time (‘energy’, measured in megawatt hours), a different picture comes into focus. The chart below shows how the total energy, over two years, was distributed over the same bands of output for South Australian wind farms: 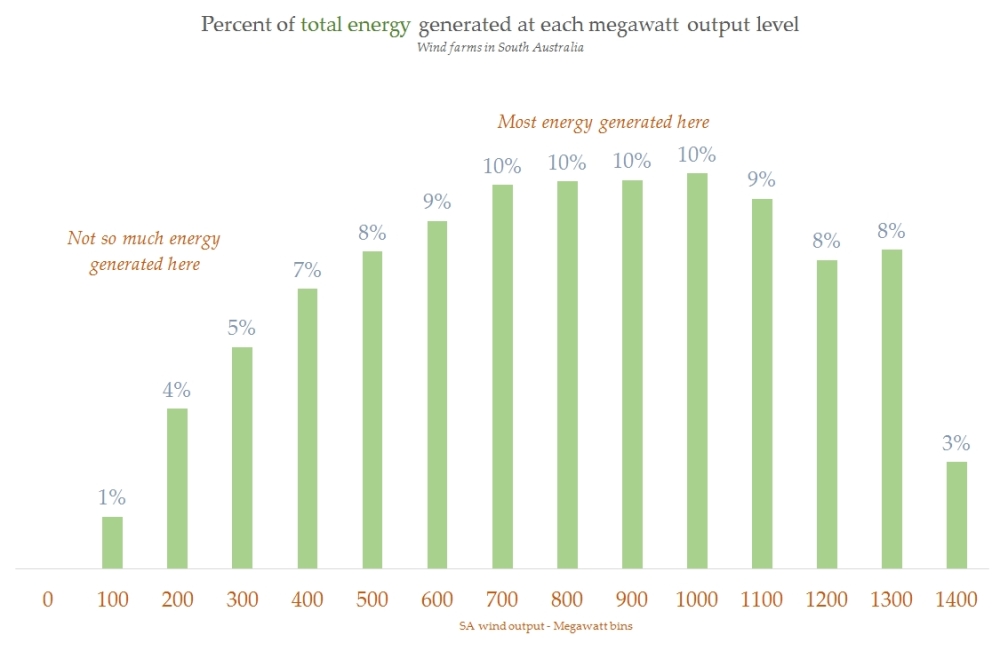 And the two distributions together: 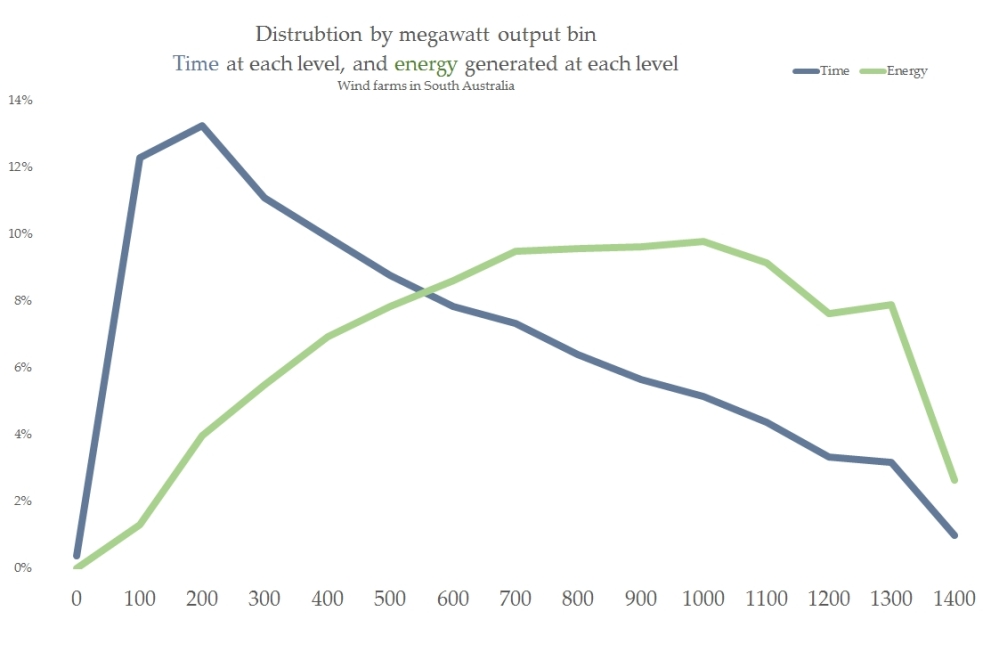 The chart above is really quite telling. It seems counter-intuitive, right? Shouldn’t the bulk of energy come from the bands where most hours are spent? Well, no – because as wind speeds increase, you get much more power, even though the periods are brief.

This is why a long, thin tail end of rare but important periods of good winds counts for more than you might think, and why wind had managed to contribute a decent percentage to South Australia’s total energy demand over the years.

There’s a point about energy and capacity somewhere in Uhlmann’s original comment, but it seems he’s latched onto a small-sounding percentage in an AEMO report and run with it.

Uhlmann’s error seems to be innocent (in a way, he’s accidentally over-egging the actual percentage of time spent at full capacity – it’s 0.006% between 1,390 and 1,400 megawatts, so he’s making wind farms look 5,262 times better than they are), so it isn’t fair to imply this happened as some conscious scheming against renewable energy.

Despite this, and like the error in causality made minutes after the September blackout, Uhlmann’s remarks about capacity factor illustrate something important: political frames around technological issues work to some degree, but when it comes to interpreting technical stuff, it falls down, and errors creep in at an amazing rate.

Some of the technical issues Uhlmann raises around new types of generation technology are reasonable. Perhaps the final step in the cascade of events in South Australia – a frequency collapse caused by the interconnector failure – could have been prevented, had South Australia been fully reliant on carbon-intensive power stations, or if a fleet of batteries and hydro power stations could provide instantaneous ‘synthetic inertia‘ (AEMO’s final report into the event, due for release this March, might shed light on these hypotheticals).

Similarly, being able to dispatch supply quickly during times you’re blindsided by suddenly high demand raises fresh challenges with generation that relies on naturally varying resources and not many cheap, fast machines to store energy.

These aren’t small challenges, but reporting them to the public requires some serious patience and either technical understanding, or the willingness to defer to those who have it.

The attitude that the truth lies between polarised political extremes leads to factual errors, because this is a multi-dimensional issue. There’s up and down and back and forth, in addition to left and right. Inaccurate reporting is just going to make something that’s already hard significantly harder, whilst the practitioners of impatient hyper-political coverage emit bemusement because they’re noticing that decarbonisation isn’t easy.