“I believe that someday, scientists will come to see that only the theory of intelligent design provides even a remotely rational explanation for the known universe…..let us demand that educators treat evolution not as a fact, but as a theory”

Only in post-satire 2017 could US Vice-President Mike Pence, unashamed young-Earth creationist and a man who once demanded Intelligent Design be taught in US public schools, find himself staring into the skulls of million-year-old skeletons in Australia’s oldest, grandest science museum, as a throng of excited scientists milled in the park next door. They’d just marched down Macquarie St as part of the Sydney chapter of the global ‘Science March‘ events.

Pence represents the antithesis of the core purpose of the ‘March for Science’ His feeling is that reality can be intuited without effort, and that feelings are divine. The throng outside the window face up to the fact that determining the shape of reality is effortful, time-consuming and expensive, and the output of these efforts is important.

Much of the rhetoric at the Sydney science March went beyond calling for restoring funding to scientific research and delved into how scientists can urge decision makers to incorporate science in their process. Despite a few serious hiccups around inclusiveness and a sometimes ambiguous agenda, it felt worthwhile.

There are those who simply believe that scientists shouldn’t be arguing for the uptake of the information uncovered by their work. It’s odd stuff, to me.

“I fear that scientists protesting in support of their own disciplines may inadvertently reinforce dangerous perceptions that scientists are part of a detached elite,” said Michael Biercuk, a quantum physics professor at Sydney University. Michael’s right to be worried about that perception, but the funny signs and obvious passion of protesters tends to humanise, not to alienate.

Others appreciated the resolve of the marchers, but simply had doubts change would occur.

“Science in Australia is in a different situation and while it is good to show solidarity with our US colleagues it’s unclear what the Australian marches will achieve”, was the formal response from the Australian Academy of Science. “It’s not going to impact the Trump administration in any way. I am not quite sure what would impact the current president, but I guarantee that a march will not.” said Robert Young, a coastal scientist at Western Carolina university.

There are many schools of thought on how best scientists interface with the general public, but perpetual silence is not one of them.

I can understand why this nervousness manifests. The core method uniting many different fields of science is observing reality, not changing it. Their instincts are to watch, not to change.

The more pragmatic reality is simply that only a small component of science – the method – is apolitical. The rest of it – people, culture, politics, economics and society – interface in complex and sometimes-unpredictable ways with the rest of our species. As the organisers wrote,

“It was a mistake to ever imply that the March for Science is apolitical — while this march is explicitly non-partisan, it is political. We do not endorse any candidates or political parties, but we do advocate for all policy makers to enact evidence-based policies in the public interest”

It’s fair to assume quite a few people didn’t attend the marches around the world as they’d got wind of quite a few organisers quitting due to an ingrained antagonism towards inclusiveness and diversity.  You could hear echoes of these issues in Australia, but it was a little confusing and never quite clear. I felt a little hesitant to go myself.

In mid-March, the serious difficulties organisers began to get some press:

How the March for Science splits researchers

In response, the Washington DC based organisers released a statement:

“We cannot ignore issues of racism, sexism, homophobia, ableism, xenophobia, or any other form of discrimination in the discussion and implementation of science. Nor can we ignore the ways in which science has been misused to harm marginalized communities”

There was no obvious resolution, the organisation process seemed opaque, and so potential attendees were left with an odd sensation of awkwardness and a need for some detailed moral calculus about attending their local chapter. I don’t doubt the size of the marches was lesser due to a lack of coherent messaging on inclusiveness and an antagonism towards diversity bubbling to the surface within the ranks of organisers in the US – next time, I hope they incorporate diversity from the outset.

When I attended the ‘March in May‘ in 2014, every single imaginable gripe was represented, with no clear purpose. The collection of signage and the content of the speeches at this rally were nothing like that – the messages were surprisingly cohesive. It was nice.

The demands were simple: please accept our conclusions. We’ve checked, and we’re sure, so start listening to us. 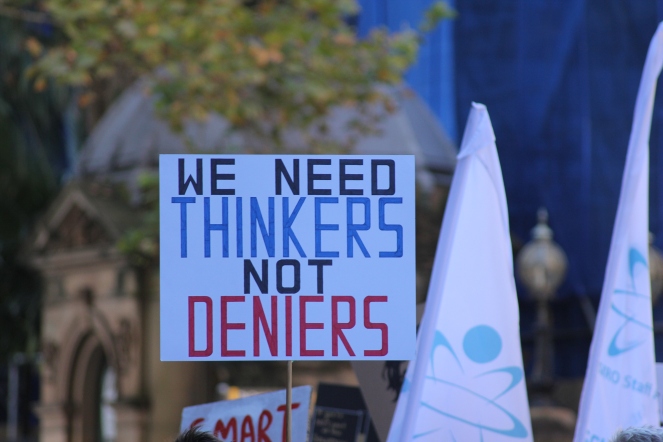 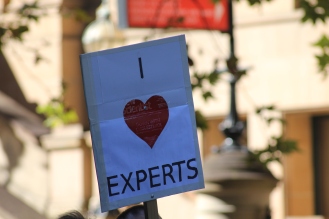 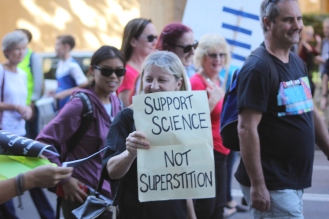 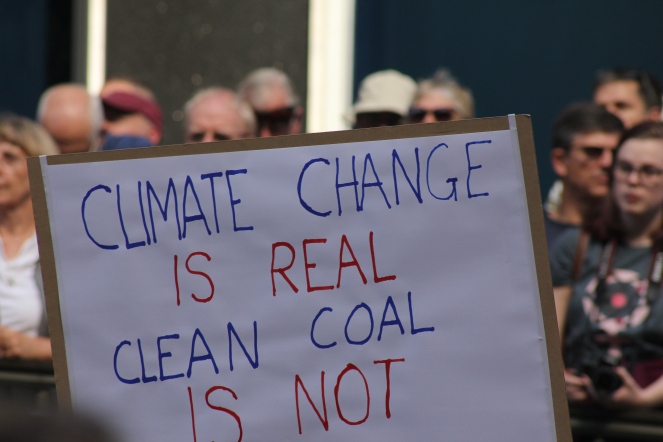 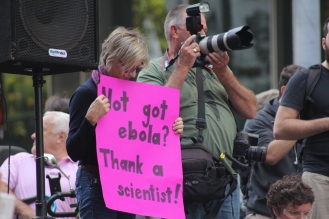 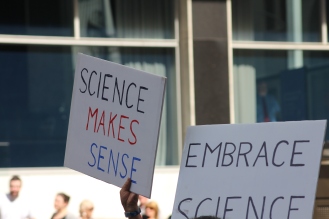 My friends pointed out something really important that I’d not noticed earlier – no cliches dominated the dress or the signs. Very few lab coats, no test tubes, no empty thick-rimmed novelty glasses. These were professionals presented as people – something I’m sure added some authenticity to their message.

There was a subtle political contingent at the protest – the Greens and the Science Party had a presence, alongside a couple of anti coal seam gas mining groups. Briefly, during the speeches, someone unfurled a giant ‘FUCK TRUMP’ banner, but it quickly disappeared. ‘Democrats Abroad‘ featured on quite a few signs. 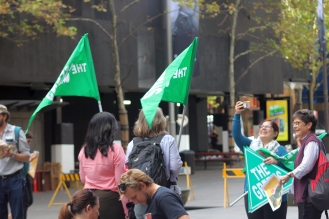 Though the crowd seemed unanimous on the question of whether scientific information should form a part of political decision making, the role and presence of political parties seemed less welcome. The Greens’ position on genetically modified organisms and nuclear power would likely conflict with the views of many attendees, and there seems to be some nervousness around the science party too. Endorsing one political brand seems at odds with urging policymakers to adopt evidence regardless of their own allegiances.

This strikes at the heart of the question this rally was grappling with.

We know the method, and we know that it works. But how do scientists convince decisions makers to include regularly-checked evidence as part of their process? Should we hold up a sign and shout? Should we ask people to vote for representatives of science, or sign up to be party members? Should we refuse to participate in anything even remotely political, purely to control perceptions?

The predominant answer seemed to settle around the first option. Being politically active doesn’t negate any capacity to walk back into the office on Monday morning and use critical thinking skills to determine the nature of reality. This was a crowd pleading for more attention paid to rationality, not a crowd damaging their own capacity to be rational. “If you’re a scientist, please make it your citizen’s duty and get out there, write to the public, speak to community groups, speak to politicians”, said Simon Chapman, a retired professor from Sydney University. Jonica Newby, co-founder of Catalyst, said of science, “How else do you find out about shit?”

There was a particular focus on climate change and climate action – largely because this area seems to be a perfect and consequential example of strong and independent lines of converging evidence being ignored by decision makers. This didn’t feel political, but it still felt impassioned. This crowd cares about climate change for a diverse range of reasons, including caring for their future and accepting the evidence. For the most part, I didn’t feel they cared because that view aligns with the box they tick on polling forms. 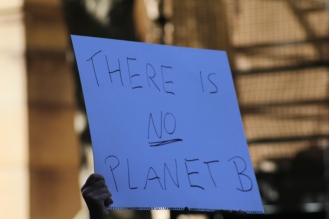 The organisers of the Sydney event did a decent job of ensuring a mix of representatives at the event. Luke Briscoe presented an Indigenous science declaration to the committee. Seeing brown faces behind a microphone is genuinely rare experience in Australia, no matter the venue or event. It was good to see. It’s pretty clear from Twitter exchanges that this was at least partly due to engagement on social media with their critics:

I don’t doubt the global movement was far from perfect, and that all of this could have been avoided if strong principles denouncing the biases underpinning discrimination were installed from the outset. It is worth noting the Sydney march did do a good job giving us a chance to hear from voices we barely ever hear from.

“Universal Literacy
A well-informed community is essential to a free and successful society. We support education to promote broad public knowledge and discussion of scientific work. As professionals, parents, and community-engaged volunteers, we enthusiastically contribute our time and expertise to helping children and students of all ages engage with the physical universe and biological world.
Open Communication
Publicly-funded scientists have a responsibility to communicate their research and public outreach and accessibility of scientific knowledge should be encouraged. Communication of scientific findings and their implications must not be suppressed.
Informed Policy
Public policy should be guided by peer-reviewed evidence and scientific consensus. Public policy must enable scientists to communicate their publicly-funded research results, and must support literacy in science, technology, engineering, and mathematics.
Stable Investment
A long-term, strategic approach to investment in scientific research and development is essential for driving true innovation. Government commitment to stable science funding policy will deliver solutions to complex challenges, promoting prosperity for all”

Did the rallies in Australia  achieve those goals? It’s almost impossible to say. The objectives of the global rallies were more numerous, and more ambiguous.

I felt like these could have been boiled down to a snappier, stickier message: reality matters. It follows from those two words that informing the community, political and public communications and investment are important. But words like ‘stable’, ‘informed’, ‘long-term’, ‘solutions’ – they fill up corporate strategies. They’re words that fall immediately out of the bottom of your mind as soon as you hear them. Much of the impact of the rally could have been catalysed if it were behind an uncompromisingly tight and crystalline message. Reality matters.

Despite over-long statements and issues around diversity, I feel like the message that was being channelled through the attendees was hugely important. A politically-active science community is a new thing, but it’s a necessary thing, and I hope this is an effort that’s tuned and tweaked over various iterations.

It’s so easy to forget how serious and dark the threat posed by pseudoscientific authoritarianism is. When Sydney marched, they marched near one of the world’s most powerful men, who has actively campaigned for fantasy to override fact in America’s education system. The March for Science was an early (and hopefully evolving) effort to push back against fantasy, at a time when antagonism towards reality is stronger than ever.