Alright, I’ll be specific. It’s a concentrating solar thermal power station that will use molten salt as a medium to store solar energy collected by a field of mirrors that are pointed at a single, tall receiver. It’ll have a capacity of 150 megawatts, and it’ll be able to store 1,100 megawatt hours of energy (that’s about 8 hours at full output). Here’s an example of a concentrating solar thermal plant, from the trailer for the new Blade Runner sequel:

The announcement of an offtake agreement between the developers of the plant, Solar Reserve, and the South Australian government, took me by surprise. Specifically, it took me by surprise because the technology, concentrating solar thermal (CSP), is relatively far behind in the global stakes. Here’s a chart of total installed global capacity of a range of different renewable energy techs around the world: 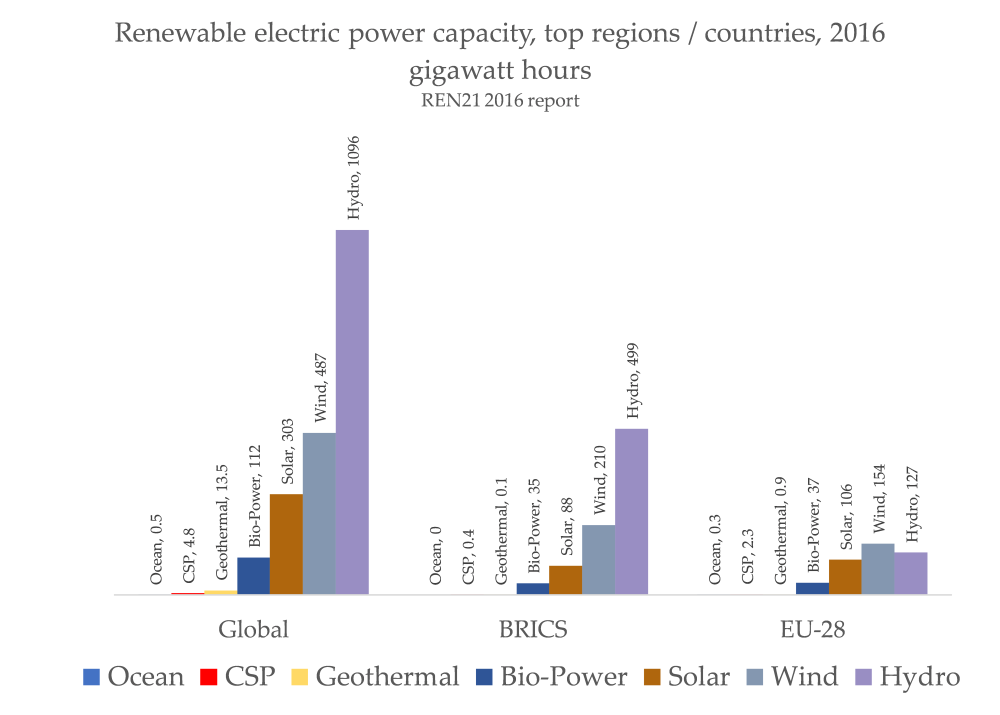 Despite having been around for quite some time, CSP hasn’t seen the huge reductions in cost that wind and solar have, over the years. It remains relatively expensive, and that’s been a big factor in how little it’s been deployed.

The Finkel report produced some estimates of relative costs of energy, in the chart below – you can see solar thermal with twelve hours of storage being, easily, the most expensive option in 2020, but becoming more competitive over the next few decades. 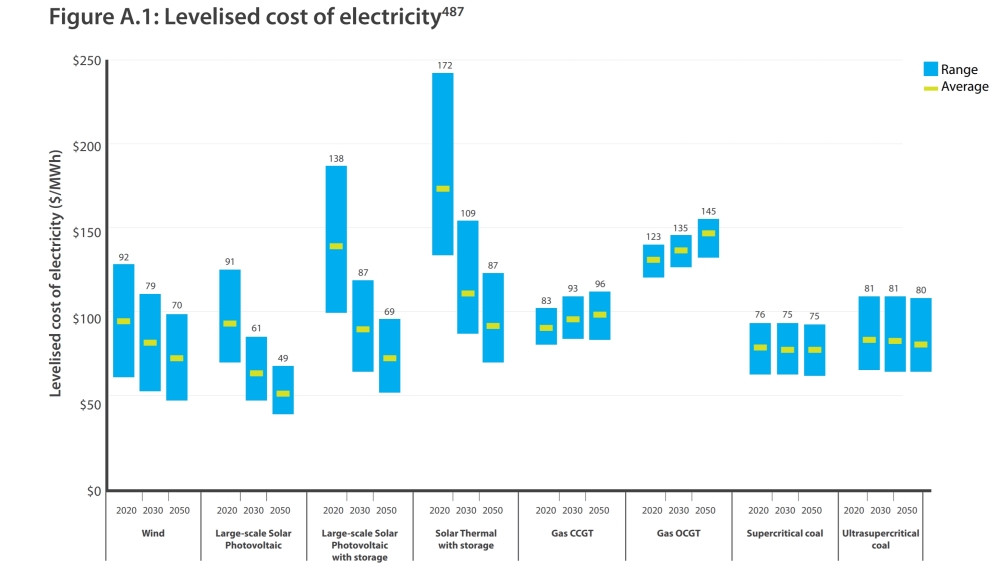 A question that’s come up a lot since the announcement has been why and how a relatively expensive technology is suited for the purpose of South Australia’s grid. The answer is relatively simple: cost isn’t the only factor, when it comes to deciding which technology is best suited for a site, state or country. The Aurora solar thermal plant (assuming it can live it to performance expectations) is a great fit for SA, for a few reasons.

“We were concerned about jobs and the future, so now this looks so positive.”

“It’s a modern Australia now. We as Aboriginal people have got to maximise opportunities to live in this country and that’s having a job, having an education and contribute.”

“It’s baseload renewable power, it uses a lot of the same skill sets as traditional coal-fired power does so there’s the chance to provide jobs to the people that have always been supplying us with power — but in a clean, renewable fashion.”

The degree of local, community support for the power station is huge – I suspect this would be the same if you polled South Australia, or Australia. This is a big factor, and there’s no doubt the community’s long-running, tireless campaign helped put CSP on the map in SA. It’s also a factor that isn’t considered anywhere near enough as it ought to be, when it comes to the development of publicly-funded renewable energy in Australia.

First, there’s a solid eight hours of storage integrated into the plant. This doesn’t have to be produced at night, but adding in that quantity of dispatchable output makes a decent difference to how the grid will be managed.

Second, the plant uses a spinning turbine (steam is heated by the mirrors or the salt) to generate electricity. This is a type of energy storage, but one that’s perfectly suited for tiny, rapid tweaks to input and output to ensure the frequency of the grid remains stable. Generators with a hunk of rapidly spinning metal – ‘synchronous’ generators’ – are better suited to serving as tools the grid operator can use to arrest changes in frequency (you can read a bit more about grid control in this gigantic, impenetrable report).

South Australia’s seen a rapid growth in wind and solar, which are both asynchronous – simply, they’re not quite as good at helping grid operators keep things stable (though they can provide some help). CSP fills that widening gap, also allowing for the installation of more wind and solar whilst retaining grid stability.

It’s hard to argue that energy infrastructure ought to benefit the political fortunes of whoever’s in charge of a particular region, but it’s also hard to argue that the  presence (or lack of presence) of new technology is often related to the blend of political views that dominate those who do the building, approving and announcing.

In this case, South Australia’s Labor government have announced a very popular and broad mix of technologies, schemes and concepts as a response to efforts by the federal government to pin the state’s current mix of issues on local state decisions.

Concentrating solar thermal neutralises a key point of attack against South Australia – namely, that the state’s government is inactive.

This one’s pretty straightforward. CSP is low emissions. Here’s some data from 2011 (there’s more recent updates but, look, I’m in a hurry): 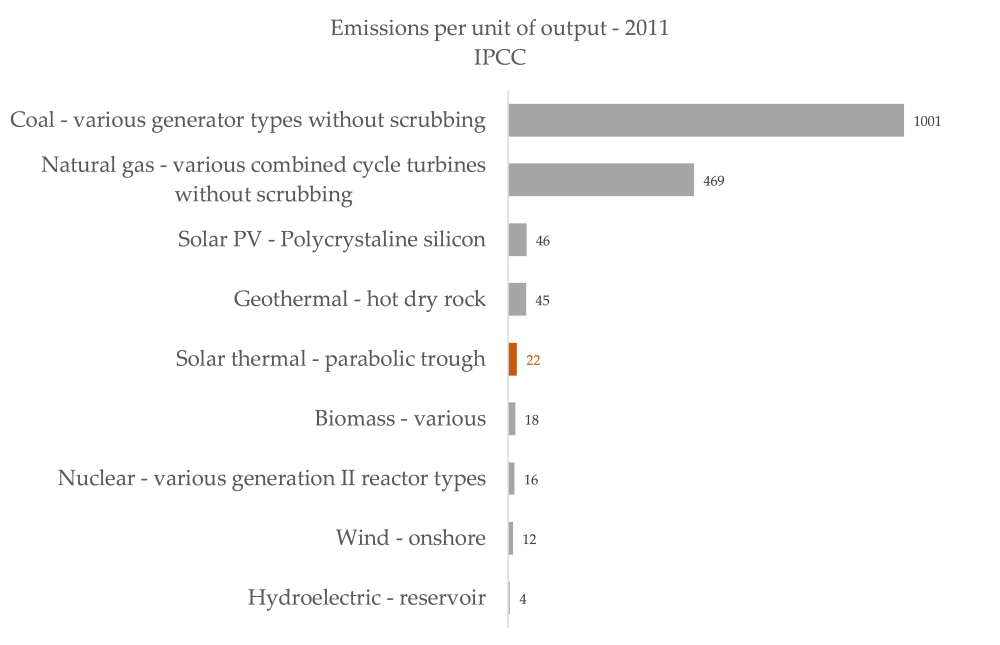 These factors are broad, but they highlight how narrow and blinkered a focus on the raw cost of building and operating energy can be. When it goes wrong, it goes badly wrong – think of a really cheap wind farm being built in a community that doesn’t want it there, or a CCS plant that’s lower in emissions but stunningly expensive and unsustainable.