The Christchurch massacre was perpetrated by a white supremacist far-right terrorist – a believer in the ‘great replacement‘ conspiracy theory that non-white immigration is leading to the erasure of the ‘white race’.

Theories like ‘great replacement’ require a bedrock of widespread, mainstream culture to exist. As that mainstream culture shifts further to the right, with sizzling and crackling fountains of increasingly aggressive racism permeating culture, these theories go from existing to becoming physical and realised, in blood and screams.

Together, they create an environment necessary, (though, on its own, insufficient) for the spawning of far-right terror and large-scale massacres,

This violence is fuelled by precisely the same anxieties that newly pervade mainstream culture. Paranoid fears of white extinction and imagined discrimination against white Australians dominate mainstream discourse, and they fill the pages of manifestos in the inbox of police departments minutes before massacres.

Nothing is quite as dangerous as people who wield immense societal power, but who are convinced that they’re cornered. As the centre of mass of Australian discourse is pulled, by politicians and media outlets, towards a more violent, ugly extreme, there are ways to push back – to reverse that inertia and fight the lurch.

The ideas below are not exhaustive, in any way. But I hope these ideas help.

Stop presenting ‘kindness’ as the cure-all

Like the debate about dealing with anti vaxxers, there’s plenty of confusion about whether aggression or civility is the best approach. Like that debate, it depends. ‘Respect the misinformed, but have no mercy for the misinformers’ has always been my guide.

I wrote about this in 2016. A nice journalist said my piece was ‘identity politics’. One Nation senator Pauline Hanson has since been subject to a lot of kindness, and a lot of cups of very polite, civil tea, and now she’s actively funnelling advocates of ethnic cleansing into the halls of power. Meanwhile, alt-right grifter Milo Yiannopoulos was banned from events and social media platforms, and he’s a sad, bloated failure.

News Corp has been running a long campaign against ‘tech giants’ – companies like Facebook and Google – as vengeance for their perceived impact on revenue streams.

In the wake of the Christchurch massacre, News ramped up its campaign, and the Prime Minister and opposition leader both immediately got on board. This, they say, is justified on the grounds that Facebook and Youtube (owned by Google) didn’t delete footage of the massacre fast enough. There is some truth to this.

But old media did worse. Sky News broadcast footage filmed by the assailant, even after they had time to deliberate and edit it. It was aired in Qantas lounges, and on the channel viewable inside aircraft. Seven and Nine aired it too.

There is a distinction between an unedited live-stream of the raw footage, and the edited versions shown on media networks. But it is no coincidence that the networks and media outlets that worked so hard to stoke anti-Muslim sentiment were also the ones broadcasting the footage. They are also the outlets working hard to humanise the murderer, scrabbling through their history to find snippets that might explain his actions. 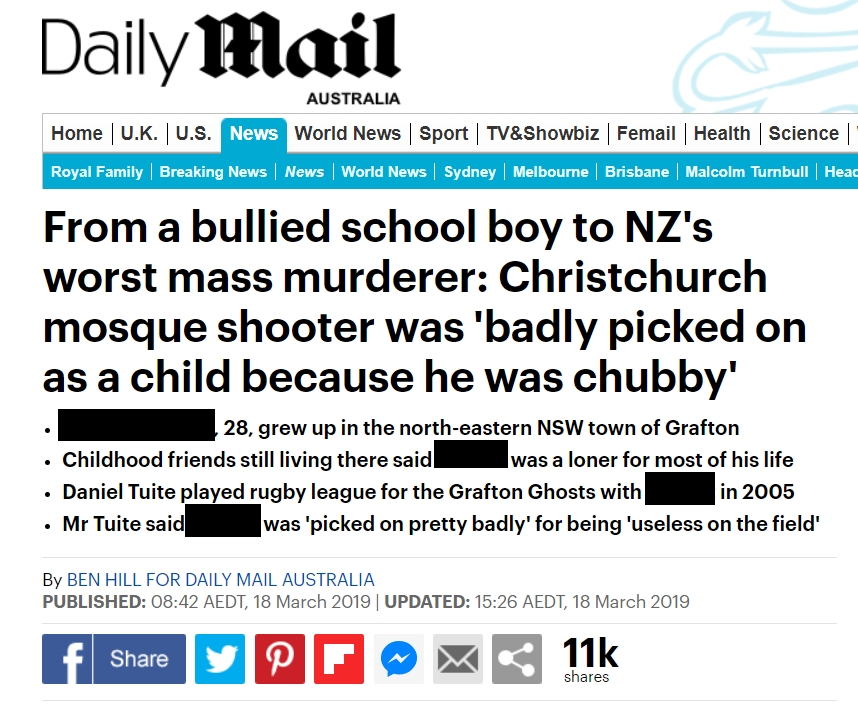 The regulator, ACMA, has launched an investigation into the broadcast of the footage. Coincidentally, an 8 month investigation into the vilification of African Australians by Channel 7 found they’d breached the code. The consequences? Stern demands for ‘training’. Old media needs to be fixed before it points its fingers at social.

Please think about where we are now.

There’s very little consideration of scale and magnitude. I can’t quite process how the debate about ‘egg boy’, a young teen who slapped an egg onto the head of a nazi senator, took up more airtime than the fact that the senator had just openly and loudly approved of the actions of a man who killed 50 innocent people in a single shooting spree, or that he and his white supremacist gang (many of them convicted or wanted for hate crimes) proceeded to bash and choke that teen.

In this context it seems weird to quibble about the tactical prowess of egging (If you are going to do it, please, please please try and get some diverse voices to chime in. This ABC article speaks to white experts, quotes tweets from white people, and tops it off with a broadcast TV clip with a panel of four white people).

Advocates of ethnic cleansing in parliament is uncharted territory. Treat it as such.

Plenty of racism is covered in a sheen of empirical language, and almost all of it, after you scratch the surface, is based on serious misunderstanding of how science, evidence and data work.

The ‘African gangs’ campaign, run in parallel by a range of media outlets and designed to inspire abuse of African Australians, was based on garbage math. Herald Sun columnist Andrew Bolt wrote an article about the ‘immigrant invasion’ in suburbs, but botched his division. These are basic errors, made because the intent is the inspiration of race hate, not mathematical or analytical accuracy.

Please, stop doing this, and friends in media, please start calling it out more and more.

Anning’s presence on media networks, broadcast to millions, is justified on the grounds that he’s an elected representative – and it’s true. The One Nation party, led by another ageing xenophobe, was granted a quota at an election, and through a series of mishaps characteristic of the party, Anning ended up in that quota spot, having been listed on their ticket.

Yeah, he only got 19 direct votes, but that’s not how people get elected. The 147,478 people who voted for One Nation in 2016 bear responsibility for Anning’s presence.

More recently, failed Labor leader Mark Latham won a spot on the NSW upper house on the One Nation ticket – he who appeared on the neo-nazi podcast ‘the convict report’, a favourite of ‘Dingo Twitter’ and the festering fever-swamp alt-right community in which the Christchurch murderer dwelled.

Anning’s harm to society far outweighs the principle of giving airtime to elected officials. This isn’t really a contentious point. But the national broadcaster still live-streams his press conferences – unedited, un-analysed and un-contextualised. It’s mind-boggling. It has to stop.

This one’s easy. If part of a community does something not good, you can’t then tar every single human who belongs to that group with that particular wrong-doing. This attitude is racially weaponised: it’s applied selectively to minority groups, and never to the ‘default’ majority.

I’ve described this as ‘race-tagging‘, in media, where ethnicity is highlighted for specific races and ignored for others, as a tool for signalling and inciting racist abuse in society. 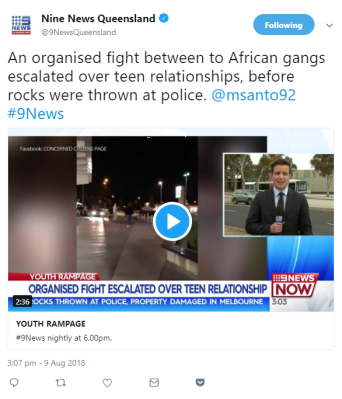 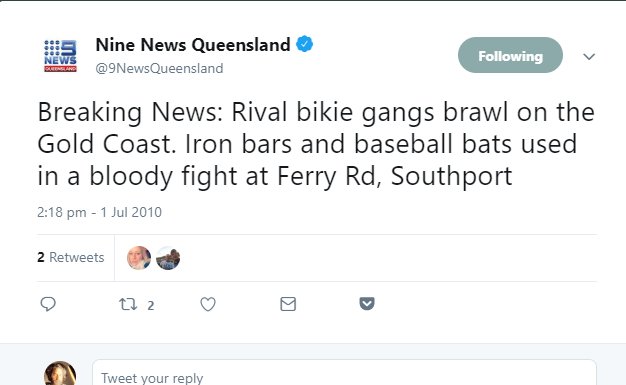 It only stops when we start calling it out. No one in their industry will call it out, and there’s zero percent probability they’ll recognise how damaging it is. So, yell at it.

Get some diverse voices and faces in your newsroom and political candidates as soon as possible.

It’s hard to avoid the connection between Australian media’s dual problems with race (either inciting racial hatred or failing to properly deal with its presence) and its unrepresentative make-up. Same with politics.

To most journalists and politicians, gripes about racism are petty and exaggerated, even days after a white supremacist gunned down 50 people because he thinks interracial marriage is wiping out the white race. The problem isn’t that enough violence has been committed to make them care – the problem is that they will never care, as long as they stay homogenous and insular. 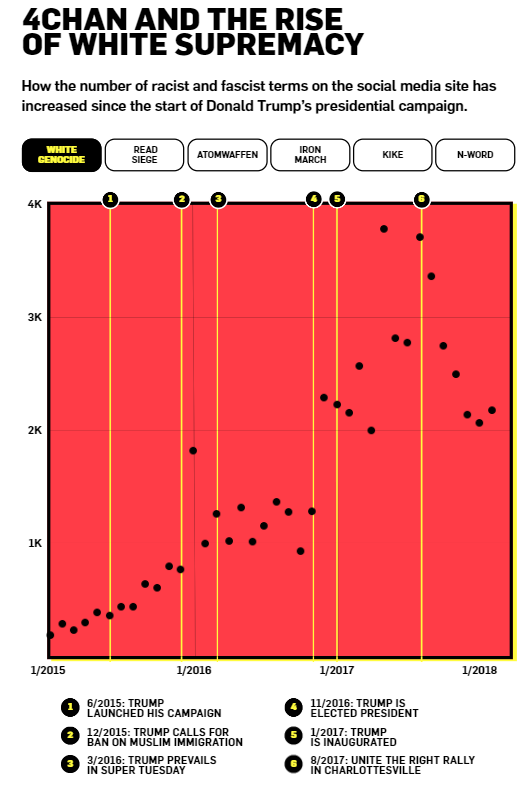 In its modern form, it operates largely through a pseudo-ironic coding, designed to confuse a literal-minded political and media landscape. It works incredibly well, because the ten seconds it takes to dig deeper into these issues is never taken. As a consequence, the Australian senate came incredibly close to voting approvingly of a white supremacist slogan.

There’s no excuse any more. These tricks are obvious, but they’re amazingly effective at hijacking the will of the lazy and complacent.

Please be receptive to criticism

One of the starkest characteristics of Australia’s media industry is its in-built resistance to criticism and self-reflection. A lot of different industries have this, but not many industries have the power and influence that media does.

A simple consequence: any habitual wrongdoing always evolves into a self-replicating widespread death spiral that cannot be stopped. On issues of race and social cohesion, the quantity of self reflection is near-zero.

This has to change.

Steve Bannon isn’t yelling abuse at women wearing headscarves on the bus (yet), but he’s a succesful grifter supplying PR to white supremacists. It doesn’t matter whether he’s racist or not – giving him an blank platform and softball questions rather than carefully curated skepticism is a political act. 4 Corners aired a long interview with him, and the journalist’s smug insistence that there was ‘nothing wrong’ with it is incredibly jarring and unnerving in the context of the recent tragedy.

In that interview, Bannon issues a prescient prediction:

“I absolutely see Australia is going to be a hotbed of populism. Just knowing the cussedness and grit of the Australian people. This revolution is global … it’s coming to Australia.”

He was right. Bannon’s brand of white supremacy – online, ironic, confusing and violent, really did come to Australia.

This is part of a broader issue – even when backlash against racism occurs, it’s treated as a ‘debate’ that can be resolved through polite, civil chat, rather than a collection of ideas that, when expressed, hurts Australians. That you can erase the toxicity of Bannon’s ideas with questions, or that you can invite a white supremacist to a panel on a state-funded broadcaster, as the ABC’s Tom Tilley did.

It was later revealed, by the ABC, that the Christchurch massacre perpetrator specifically praised that hate preacher for that specific appearance – though they obscure which ‘televised appearance’ it was in their article (see: ‘please be receptive to criticism’). Tilley also interviewed a white nationalist very soon after the Charlottesville murders in the US.

Some or all of these things being rectified won’t fix racism. This isn’t the magical world of Oscar winner (shudder) Green Book, where a moment of clarity and a cuddly friendship resolve all discrimination forever.

But incremental effort has incremental outcomes. Things get better, not in one bulk reset but in tiny, imperceptible fractions.

If we do nothing, the curve keeps shifting. The tail end starts to drape over increasingly violent acts, as the middle bulk lurches towards the horror of xenophobic paranoia and mob violence. This isn’t good, but we can fight the lurch. So please, try.