If you don’t like social media, the easiest and least-effort way to feed that loathing is by talking about shame. It is a partly reasonable gripe – sometimes, the way these websites and apps are designed tends to accelerate pre-existing mob instincts, and sometimes, people suffer far more than they deserve.

The rise of public health measures to keep people far from each other, in response to coronavirus, has created a new conduit for shaming.

This article details some good examples of where it has gone too far (such as a Polish professor who tragically took his own life after a barrage of hate) and extremely silly examples (such as the ultra-evil British pub mega-corpo-business-chain Wetherspoons being criticised online). But nowhere does it mention the rise of shaming and outrage perpetrated by big media outlets.

This has become a thing, around the world, and it tends to involve some sneaky photography. Consider this Buzzfeed article, “24 Pictures Of Americans Failing Horribly At Social Distancing During The Coronavirus Outbreak”, in which almost every image is taken from a distance, using a zoom lens:

The reason you don’t see photographs taken from close to or within these ‘crowds’ is that a zoom lens (or a digital zoom) compresses distance. This gives the impression that a crowd of hundreds is squished into a tiny space.

At some point when all this is over, someone should try to educate the public on how newspapers use long lenses to foreshorten images and make people look closer than they are.
The lines on the road are a giveaway here that these people are much more spaced apart than it appears. https://t.co/nBYp5WR183

A nice illustration of this illusion is this photograph of two planes that were a very reassuringly large distance apart, taken with a telephoto lens by Ben Wang in 2004:

We’re all stuck inside. We’re all confused, angry, panicky and anxious. We’re looking for an outlet for that red hot ball of fear that’s sitting inside our chests right now, and pictures of pure bastard sun-soakers prey on precisely the right sentiment.

The use of crowd-exaggeration in media articles attempting to shame people and invoke outrage came up frequently in Australia’s beach debate, in which photographs of beach-goers were shown on news sites:

After a slew of articles depicting irresponsible youths relaxing on beaches, NSW and Victoria police introduced brutal fines and jail time for venturing outside of your home for any reason outside of a a few exceptions.

Data released by Google later revealed that there was a significant decrease in attendance of public places – including beaches – in Australia prior to the introduction of jail time for being outside. You would not have guessed it, from the breathless media coverage of grandparent-killing sand-sitting. Meanwhile, wealthy, older cruise-goers and holiday-makers traipsed through their rich suburbs, spreading a novel respiratory disease into their communities, with little scrutiny or shaming.

In another instance, Daily Mail Australia used an Associated Press photograph of a promenade in Sydney to imply people were disobeying social distancing rules:

Right. This photo. I am angry about it. (Apart from that shirtless guy in the middle, obviously.) Not because it’s people misbehaving in coronavirus times, but because it’s NOT a “crowded promenade” as captioned. Let me explain why… pic.twitter.com/RwmJDVzzcA

In addition to the obvious deception behind the telephoto compression effect, it later turned out that the group of people in the centre of the photograph were a co-habiting family group, as revealed by News Corporation journalist Eliza Barr:

Hi I’m Lize, here with Some News!
1. My friend @troypepper3 – the gorgeous Shirtless Man – is depicted here on his daily walk with four family members he lives/isolates with. So this picture is not a good example of a social distance fail.
2. He’s pretty talented, follow him. 😉 https://t.co/3Ww1LKbIAV pic.twitter.com/Ywqs42x7TJ

It is very clear that media narratives have played a key role in the responses of police and politicians in Australia. But today, the long-lens shaming trick happened outside my home in Oslo, Norway, this weekend.

Dagbladet, a Norwegian media outlet, published a video and an article (probably their most-viewed this year) about crowds on the main street of my area, Grünerløkka, purportedly depicting a dangerously busy Saturday afternoon:

It immediately caught my attention, because I had ventured out that day, down that street, en route to the shops, and it looked nothing like that imagery. It was busier than the dead emptiness that has filled the area for three weeks, but it wasn’t a wild throng with no space between people.

It turns out that the videographer used a telephoto zoom on a 4K Sony camera, compressing around 400 metres of a 12 metre wide street into a small space. In responding to widespread criticism, Dagbladet published a longer clip which includes the ‘unzoomed’ image, and it is clear why, for their article, they edited out the unzoomed section:

Norway’s social distancing guidelines are to stay around 1.5 – 2 metres from other people when outside. In that 400 metre stretch of road, you could fit several thousand people in that space and still not come close to breaching that rule. One Twitter user estimates there are 84 people in the photograph. Many people who live in the area took their own photographs and videos, and they make starkly clear just how deceptive the videography is, such as this video of a cyclist going down the street at 12:30pm:

Like the beach debate back in Australia, this took a hot-button issue and served it up to a stressed and anxious crowd. And like that debate, there is little chance that this will do any good.

Most of us have experienced nothing like the social distancing measures being deployed around the world, and hopefully we never will again. But this stretch has to have staying power, if we’re to lurch towards that glorious moment in time when a vaccine whisks us all from this weird, shitty nightmare.

It will last if it is realised through a sense of togetherness and a willingness to accept that people are trying their best to adhere to the guidelines. We have to build an instinct to seek out context, meaning and clarity when viewing public spaces that have people in them. We don’t know what families and households look like. We don’t know why people are on a street. If we forget the awful novelty of this social and cultural shift, and we forget to be charitable, then lives will be lost because the longevity of social distancing will decrease. 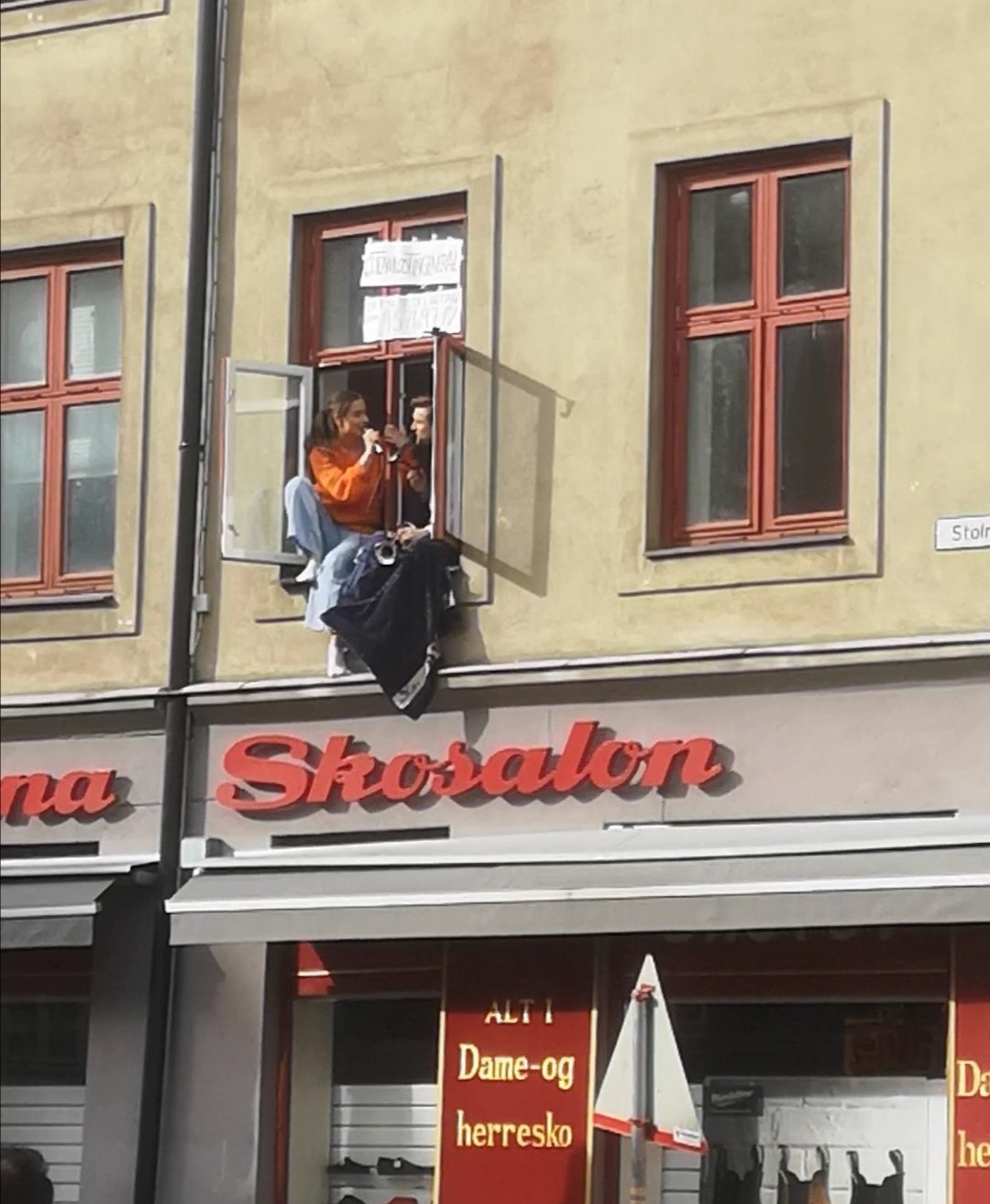 Here in Norway, we are barrelling towards long Easter holidays. Even though people on the streets adhere to social guidelines, cluster still occur, so it is probably better that busy-ness doesn’t emerge. There are probably already too many people out on the streets on sunny days, and as the holiday approaches, it might get worse. There needs to be something more to encourage people to stay away from busy areas, but deceptive shaming efforts are the worst possible pathway for that.

Part of the reason a small cluster of people did form on our street is because two people were hanging out of their window playing music. You could view this as the irresponsible arrogance of granny-killing bastards, who should be punished severely, and many will. But that will backfire. I look at that and I see people craving, desperately, a brief respite from doom-scrolling their social media feeds and engaging in the experience of sound created by another human being they can see with their own damn eyes. We will not make it to finish line if we misunderstand or dismiss how badly we need moments like this.

What is badly needed everywhere is a greater focus on understanding how this public health measure works in the long term, alongside a sense of charity and understanding for people who are deeply confused by the contradictory messages it sends. Without social distancing, the bastard virus just comes thundering back into our lungs. But if it is deployed and enforced in a callous and cruel way, it will fail badly, and more people will die.

Staying away from others is an incredibly effective tool for saving lives. The best way to make it last the distance is for media to ditch social policing in all instances except the very worst, and save that rage for rich people, corporations and politicians responsible for failing to communicate their messages properly and for failing to protect life when they could have done so.

Cover image – people queuing outside the bottle shop on my street, April 4th 2020, by Hans Kristian Thorbjørnsen, via VG