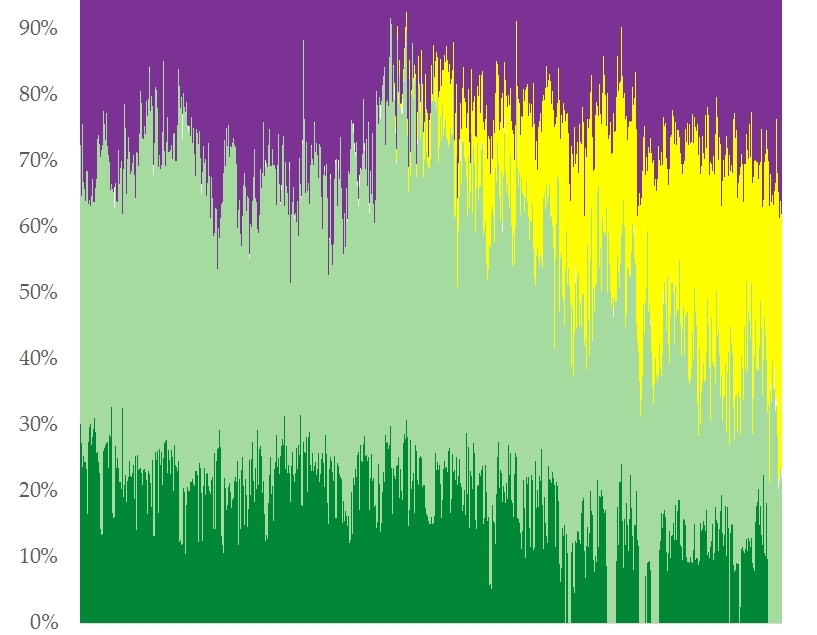 The task of switching over from carbon-intensive fuels to low-carbon technology is pretty hard. One of the many, many things making this problem way harder than it should be is our tendency to misdiagnose things that occur when new technology is introduced. Analytical exploration is replaced by the urge to lay blame on whichever technology is supported by people we find icky.

Take South Australian power, for instance. Our energy systems splits pricing up into regions – In SA, for July this year, prices were higher than usual. This isn’t the first time electricity prices in South Australia have been high – to put July in a bit of context, here’s daily SA price since 2000, with the percent penetration of wind in dark green:

South Australia’s had plenty of periods of high wholesale electricity price prior to the construction of wind farms, and since July, prices have been relatively low.

What happened in July still isn’t great, obviously. We need electricity, and so any increase in the cost of supply has a big impact on us. Choice confirmed recently that electricity remains the biggest economic concern for households – something that hasn’t changed since the inception of their survey in 2014. Hence, the emotional salience of a campaign run in both the Australian and the Financial Review to label July’s pricing period as an ‘energy crisis’:

“An energy crisis in South Australia created by an over-reliance on untrustworthy and expensive wind and solar will force the state Labor government to seek greater access to cheaper coal-fired electricity from the eastern states.

This comes amid rising concern that federal renewable ­energy targets will force other states down the path taken by South Australia, which has the highest and most variable energy prices in the national electricity grid.”

In most coverage of this phenomenon in July, two types of things happened:

In the second option, other causes are discussed, but through careful wording, a causal relationship is heavily implied. Eg:

“Turmoil in South Australia’s heavily wind-reliant electricity market has forced the state government to plead with the owner of a mothballed gas-fired power station to turn it back on…..

…South Australia, which led the charge into wind and solar energy and gets two-fifths of its power from these sources, has suffered the highest prices on the mainland, increasing the pressure on the state’s industrial energy users”

The parallel campaigns in both outlets pushed an unambiguous assertion: if South Australia hadn’t built wind farms, electricity would be cheap. This was stated outright, or implied through a focus on renewables in headlines, leading paragraphs and juxtaposed associations.

As you’ve already guessed, the dominant causal factors behind July’s prices weren’t wind farms. It was caused by a mix of things:

– Planned work on the interconnector between South Australia and Victoria:

“Competition from wind generators protects consumers from high wholesale prices for much of the time. But when the wind is not blowing, consumers are exposed to the full effects of an uncompetitive market. That is what has happened to customers in SA this month”

South Australia has seen a few coal-free periods before the shut down of the plant. The chart below shows the contribution of fuel types for each fuel type, including total interconnector imports from Victoria:

None of these periods, from 2011 onwards, came packaged with a power crisis. The reason behind this is relatively simple: the penetration of wind technology in South Australia is not enough to cause a flurry of price spikes. July’s ‘energy crisis’ wouldn’t have emerged, had SA’s fossil fuels been cheaper, or if the interconnector wasn’t down for upgrade work, or if there was a greater diversity of contributors to the market.

A period of low wind did open the door for expensive fossil fuels to dominate a market constrained by interconnector maintenance, but this factor dominated the media coverage. If you do demand that clean energy has to shoulder the responsibility for reducing the impact of expensive fossil fuels, fine – support the scientific and engineering work going into fitting variable-output clean energy with storage and dispatch capabilities.

The lengthy period of media misdiagnosis that occurred after this was telling. If you’re concerned by high prices, it’d be best to analytically address each causal factor – that didn’t happen in media coverage. Cutting one factor out of a problem caused by a stack of several factors would either sustain or worsen the problem.

The only people who win from that approach are those who wish for a world that refuses to take any action on the challenges presented by decarbonisation.