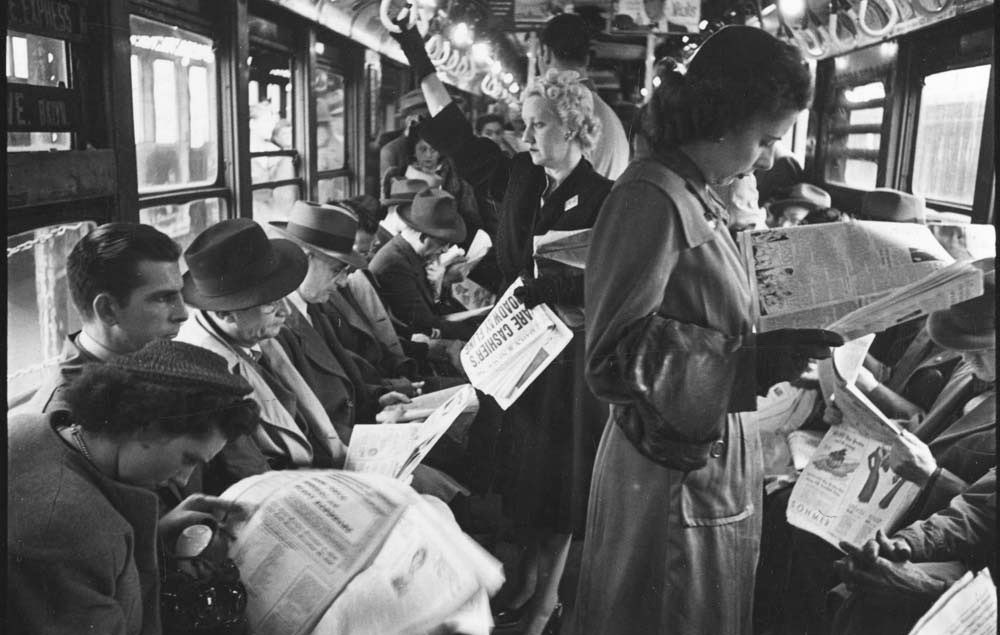 We talk a lot about two ways of pushing back against words. Legal limitations – such as race-hate laws – and social limitations, such as being called out on Facebook by 10,000 people. “Free speech” is invoked for both legal and social restrictions on speech, depending on the position of party being restricted.

A good example of the latter: Bill Leak saw criticism of his work posted on social media as an attack on ‘free speech’. Public backlash against someone frequently saying racist things is seen as a punitive restriction – as described by Jennifer Oriel: “In the two years before his death, jihadists and the political establishment inflicted horrific stress on him because he refused to surrender his creative genius and free mind to the colourless, artless overlords of political correctness”.

When Yassmin Abdel-Magied, a young mechanical engineer and part-time ABC presenter, published a short Facebook post on Anzac day that drew a disproportionate backlash (she quickly deleted the post and apologised), cooler heads in the right-wing were quick to awkwardly label the frothing backlash as ‘criticism’:

@schetzer @yassmin_a Free speech doesn't mean you are free of criticism. ANZAC Day is about respect for our diggers. Politicising ANZAC Day is atrocious.

The messages being sent to Yassmin were intensely cruel, most of which called for her to be sacked, deported or in many cases, much worse. Almost all of them invoked her religion, her birthplace or her gender. The word ‘criticism’ was used as a cognitive dissonance blanket for the few struggling to support this outrage. They wouldn’t use the same logic on backlash against Bill Leak’s racist cartoons.

I recently wrote about the racial elements of the Abdel-Magied backlash – a major driver of the intensity of the original reaction. But what kept the outrage going?

This is where the a third party comes into play – in addition to the law and the mob, traditional media outlets play a big role in punishing and policing the things said in public.

Let’s consider the mechanics of how this backlash was created and subsequently catalysed and maintained by a stream of content from media outlets – and how these worked in tandem with social media.

I’ve been using Google alerts and Twitter search to note down each article published in digital media about the backlash, and collecting the word count from each. A few of them were replicated across multiple outlets – they’re marked green in the raw data. The results* show a sustained output from News Corp, and less sustained coverage from Fairfax and other outlets. Between the 25th of April and the 11th of May, 64,160 words were published on Yassmin Abdel-Magied’s seven word Facebook post.

News Corp dominated the word count here – every day in this 15 day time period had at least a few words from News, with the exception of the 6th of May. Andrew Bolt’s blog in the Herald Sun contributed heavily, alongside the Daily Telegraph and the Australian – drilling down into News Corp only: Something I noticed whilst doing data entry on these posts was how often the Daily Mail cropped up – they dominate the ‘other’ category. Of 20,909 words published by ‘other’, the Daily Mail published 9,016 of them – 43%. A range of media outlets did straight reporting on the initial outrage on the 26th and 27th, and straight reporting on  Julie Bishop’s decision not to fire Abdel-Magied from a government advisory role on the 8th of May. The Daily Mail just kept going. The Mail’s headlines tended to be the most direct and inflammatory – pointedly invoking Abdel-Magied’s religion in headlines and focusing on shouty caps and outrage. They even had the tenacity to report on the abuse they were stoking: 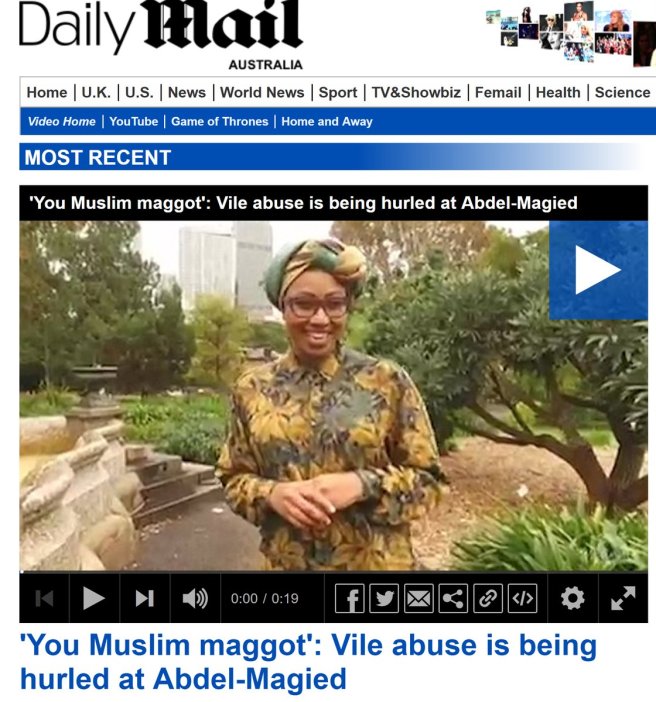 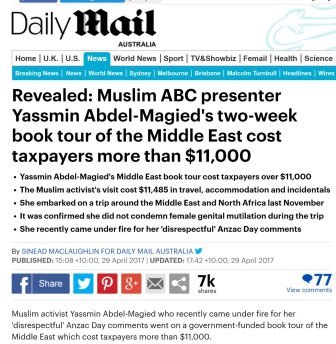 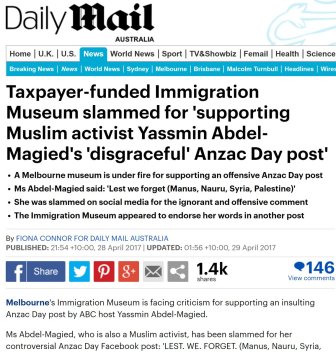 The Daily Mail was also very clearly basing articles on information just published in other media outlets – with the exception of a (ludicrous) ‘scoop’ on Abdel-Magied having sat next to Prime Minister Malcolm Turnbull at a dinner a few months back, each Daily Mail article can be traced back to an antecedent article published around 12 hours prior in another media outlet: I originally guessed a period of around two weeks of coverage in The Australian – this was roughly accurate. Towards the end of the fortnight period, there were some truly embarrassing examples of barrel-scraping. 500 words on Yassmin’s Twitter post about glasses was a fairly good example of efforts to target an individual with little care for what the actual words were. 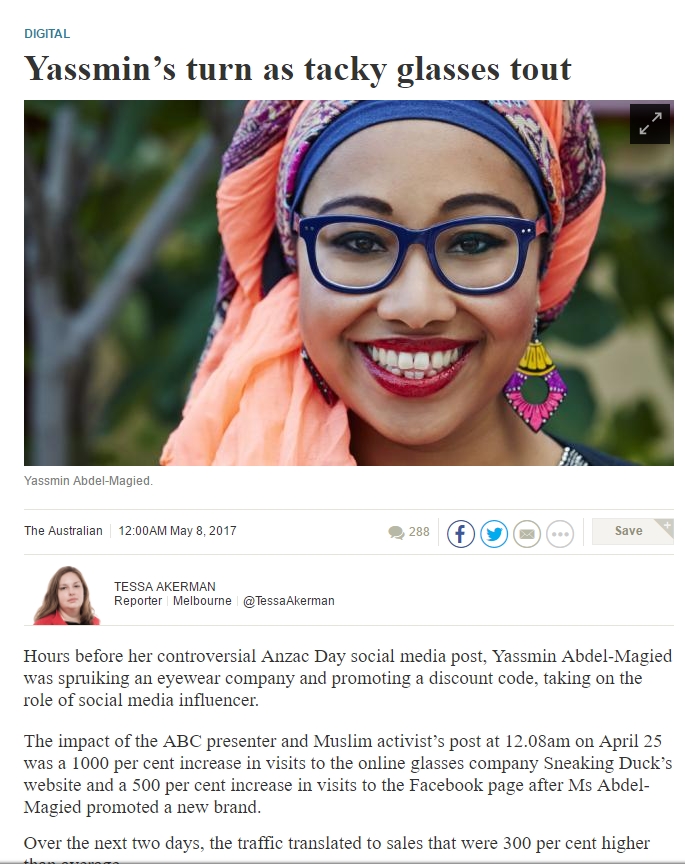 These articles were glaring illustrations of minimal effort churn – the targeted outcome here was not thoughtful investigation. It was sustained attack. This was the case for the Australian, the Daily Telegraph and the Daily Mail.

It’s hard not to feel a little unnerved by these serious and impactful attempts to chip away at public participation. The Australian, the Daily Telegraph and the Daily Mail weren’t using their power to call out the powerful.

You might expect there to be some moral calculus or ethical consideration here – but the criteria for engaging on a sustained attack on like the one above are simple. You need to be foreign, Muslim or poor, and you need to be outspoken. It’s happened many times before – usually triggered by someone appearing on the ABC’s Q&A.

The cost of speaking freely, in these instances, isn’t determined by a large collection of distributed individuals on a social media platform; nor is it determined through a slow and deliberative process of introducing and passing legislation. This is a process triggered simply by the decisions of a few people in an office.

As I discussed in my previous piece, the flurry of articles and the arterial flow of Andrew Bolt / Tim Blair blog posts supporting them tend to have a real impact on social media. Sustained, angry abuse lasts longer than the initial burst of outrage. These outlets are shining a bat signal to their audience – this is what you need to be furiously unforgiving about. In these instances, immense power isn’t used responsibly, or with consideration for the human cost of their actions.

Major parties are tentatively toying with the political benefits of racism, again. Social media use keeps ratcheting upwards. This mix is perfect for traditional media outlets with vendettas to deploy.

*Some notes on the analysis