There’s two ways we interact with electricity. The first is signalling to a wall-mounted switch that we’d like electrons to flow into a machine we have in our home. The second is ripping open a dreaded envelope and passing on some hard-earned to the people who do everything that happens behind the wall-mounted switch.

Embedded in the recent release of Australia’s Chief Scientist’s thorough examination of what a future energy system in Australia might like look like was an attempt to model how that envelope-tearing experience would change for you and I, in the coming decades, depending on whether our policy environment remains stagnant, or whether we implement government-level schemes to limit our emissions.

The response wasn’t about emissions. Electricity bills invariably end up being the centre of gravity around which every other energy issue orbits.

The features of this discussion are consistent: we care so deeply about the moment of dread when we open that bill that agendas get wrapped up in messages that speak to that fear. It’s happened before, it’s happening now, and it’ll happen again.

Back in 2013, then-Prime Minister Tony Abbott was focused on the impact of the existing renewable energy target (RET) policy on electricity bills. This expression of concern was repeated regularly by Abbott – he even commissioned a panel, led by (climate skeptic) Dick Warburton, to review the RET.

Abbott said: “We have to accept that in the changed circumstances of today, the renewable energy target is causing pretty significant price pressure in the system”

If the intention was to garner public support for dismantling the RET, the decision to examine the empirical reality of the situation was a seriously bad move.

The 2014 review of the RET, with modelling done by ACIL Allen, found that removing the RET would increase electricity prices. In fact, the only outcome modelled that didn’t lead to increased electricity bills was an expansion of the RET scheme. From a blog post I wrote for my employer at the time, this chart I made shows the final cost of bills under different scenarios

(“Real 30%” was the expanded version of the RET, and ‘Reference’ was the target at the time. “Real 20%” was a cut-back of the target, 50% growth let renewables meet half of any new demand, and ‘closed to new entrants’ was what it sounds like)

The Warburton review was confusingly presented as evidence that renewable energy was, somehow, “cross subsidised” by a “wealth transfer” from coal-fired power, but the headlines were stark in their simplicity:

Amazingly, Warburton recommended the effective repeal of the renewable energy target by freezing access to new entrants, despite his own modelling demonstrating consumers would pay the most out of all scenarios, emissions would increase the most, and the only beneficiaries would be fossil fuel companies.

Modelling wars clicked into gear – Deloitte, commissioned by the Minerals Council and the Business Council, released more pessimistic estimates of bill impacts, using renewable energy costs that were several years old at the time (there had been big, recent cost reductions in wind and solar when the modelling was done).

But even with pointedly skewed assumptions, consumers bills were only 50c extra per week, compared to the other modelling.

In the end, the RET ended up being scaled back – from a target of 41 terawatt hours (TWh) of required renewable energy by 2020 down to 33 TWh.

This was justified on the grounds of “returning certainty” to the renewable energy sector. Not long before that moment, Tony Abbott had came up with a nickname for the opposition leader: “Electricity Bill Shorten“.

Cut to June 2017. Though Dr Finkel’s report was commissioned off the back of a blackout in South Australia linked, presumptuously, to some inherent problem with renewable energy, a blueprint for future emissions reductions was modelled that looked at energy security, reliability and electricity bill impacts.

The “clean energy target” (CET) in Finkel’s report is similar to the RET, but any generator with emissions lower than a certain baseline can participate (as opposed to the RET’s blanket exclusion of anything that isn’t zero emissions). Like the RET, it sets a target for supply of clean energy, to be met by a certain year.

Most importantly, like the RET, modelling (with very conservative assumptions), found that the absence of a clean energy policy means higher prices for consumers (the report also looked at an ’emissions intensity scheme’, which penalises emissions rather than rewarding a lack of emissions):

There’s a reason for this. The modellers wrote:

“Wholesale prices are lower under the CET and EIS scenarios (without limited lifetime imposed). Both schemes provide an additional revenue stream for low emissions generation to enter and this reduces prices either by the greater penetration of plant with zero dispatch costs or because gas plant reduce their dispatch bid to reflect the value of earning certificates…Residential retail prices for these two schemes are on average around 7% to 10% lower than for other scenarios”

The mechanics of cheap renewable energy trigger immediate reactions. “I am extremely sceptical about this modelling and the claim that the CET will reduce electricity prices” said one MP, quoted in the Financial Review. Others claim the modelling is fatally compromised because previous models of RET impacts ended up underestimating bill impact. There’s a strong desire to disown the outputs of this mathematical exercise.

The Minerals Council commissioned their own warring modelling exercise – which “cast doubts” on lower bills under a CET. As is tradition, the analysis wasn’t released publicly, but it made headlines nonetheless.

Finkel defended the modelling, telling the National Press Club that:

“As is the case with all modelling exercises, the modelling undertaken for this Review depends on the assumptions. We have been very clear about our assumptions.

We were conservative in our estimates of wind and large-scale solar generator prices. Indeed, in recent months the prices for wind generation have already come in lower than what we modelled”

There have been some criticisms of Finkel’s modelling that seem to come from a more constructive place, with a better understanding of market dynamics. But these tend not to achieve much cut-through in the media.

The core reasoning held aloft by anti-clean-energy-target people is that predictions of a low-impact RET (the existing policy) turned out horribly wrong. But, we know what impact the RET has on bills. This is something we can check.

The AEMC‘s yearly report into bills found the RET is about 3.1% of our bills this year, and it’ll be 3.1% again in 2019. The AEMC also includes, in each yearly ‘price trends’ report, a forecast of each upcoming year, and the year after, broken down by each component of your electricity bill.

So, I went through each of the six reports, compiled each current year and forecast, and made the chart below

Simply, every two-year forecast of renewable energy target bill impacts before a year ended up slightly over-estimating what ended up being the ‘actual’ for that year. The % of the RET on our bill has increased, as expected, as the amount of renewable energy in the scheme also increases. But this hasn’t been underestimated.

My little gathering exercise also shows how each component’s contribution has changed over the years:

The repeal of the carbon price did have an impact on bills, but so did massive network charges. Meanwhile, wholesale prices have been increasing steadily, offsetting the small saving from carbon repeal in 2014.

The RET isn’t a mystery. We know what impact it has on that moment we tear open the envelope and look at the quarterly damage from powering our homes.

Models, famously pliable based on their inputs and assumptions, are unwieldy when it comes to renewable energy and bills.

Wind, solar, storage and hydro started expensive, but have become cheaper as more people learn how to build them at higher volumes. These new machines have no fuel costs, so they decrease the wholesale cost of supply.

Reality is boring: new technology gets cheap, simple and, increasingly, fit for purpose. There’s nothing magical, mystical or fantastical about this.

Helming your prediction-exercise of the cost of decarbonisation with someone who believes greenhouse gases have no impact on climate makes no difference to the outcome. The numbers come out roughly the same, every time. Nor does helming it with an eminent scientist and engineer, who gladly accepts the science of the issue. The numbers don’t care as much as you might expect.

The thing is, we care. People couple their support for the clean energy target to how it affects their bills, as shown in Essential’s latest poll: 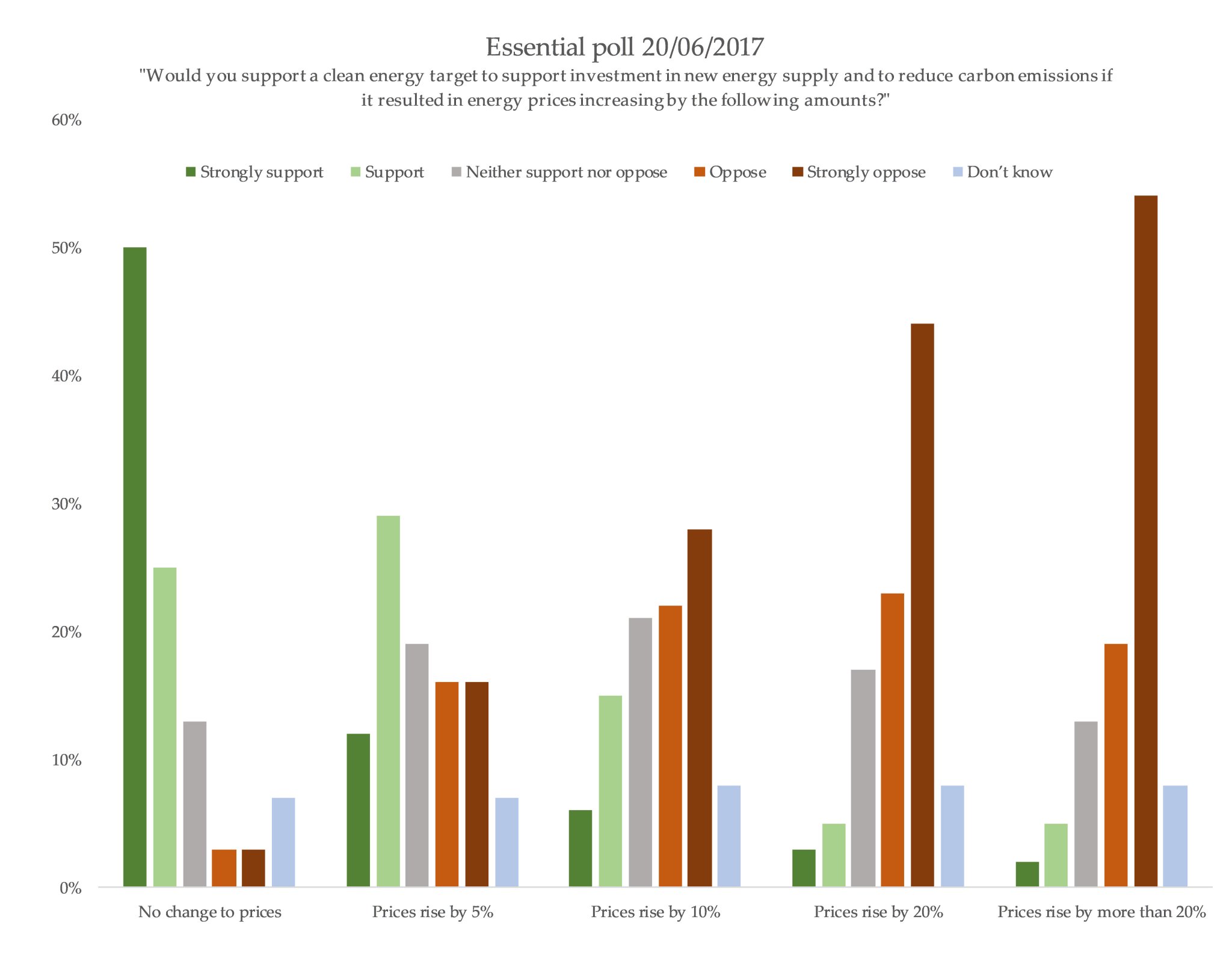 The fact we care so deeply about this means we should demand strong evidence when claims are made about the relationship between decarbonisation and the terror that sparks alive in our solar plexus when we open that envelope.

But the pattern of events in this history of clean energy bill impacts is totally perverse. The fact that bills are so important to us results in more obfuscation, not less, simply because the emotional substrate for urging eternal climate inaction is so rich and real.