As a follow up to my previous and very long post about Australia’s racist response to Black Lives Matter protests, it’s time for a very short one to address a new myth.

The narrative goes something like this: sure, maybe the protest didn’t cause a second wave of coronavirus. But everyone watching the protests saw people flouting social distancing, that caused people to slack off, and that’s what caused a bump in recent cases in the state of Victoria, in which families had been spreading the virus due to not obeying isolation guidelines (the other states with huge protests but no bump are studiously ignored).

It was bubbling around for a few days until Australia’s Chief Medical Officer Brendan Murphy voluntarily air-dropped the theory into the fever swamps of Victorian right-wing politics at a press conference:

But today, at the press conference of Chief Medical Officer Brendan Murphy, after a journalist asks a relatively mild question about whether being 2 weeks out without transmission means there was none at the event, Murphy says that the protests *did* change behaviour: pic.twitter.com/EH7758liQj

Both before and after it was given credence by Australia’s CMO, it has spread wildly. I’m going to try and collate them here. Thanks to everyone on Twitter who helped out, with special mention to Benjamin Miller. I’ll add more to this list as they come in.

If you’re familiar with the climate debate, you can see what’s happening here. A single idea is festering within an enclosed bubble of political and media friendships. Each participant sees their peers declaring something, and declares it themselves, sometimes adding a twist or an improvement using their imagination.

It is of course impossible to truly know what’s in the heart of people, or to measure their interpersonal interactions. This is probably why it’s been picked up – it’s an unfalsifiable, hazy claim.

Here’s the thing. We actually can get a rough proxy for the magnitude of human movement in Australian cities and states. And for every single city and state, the trend is clear: there has been a slow upwards climb towards pre-COVID19 levels, with zero impact on that from the rallies.

First, Google makes mobility data they’ve collated from their location data that’s on by default for many Android phones (a problematic thing, for sure). Here’s Victoria’s data, including the impact of the protest on the data for ‘parks’ – unfortunately it only goes up to June 17, but I will update this post on the 24th, when the next update is released: 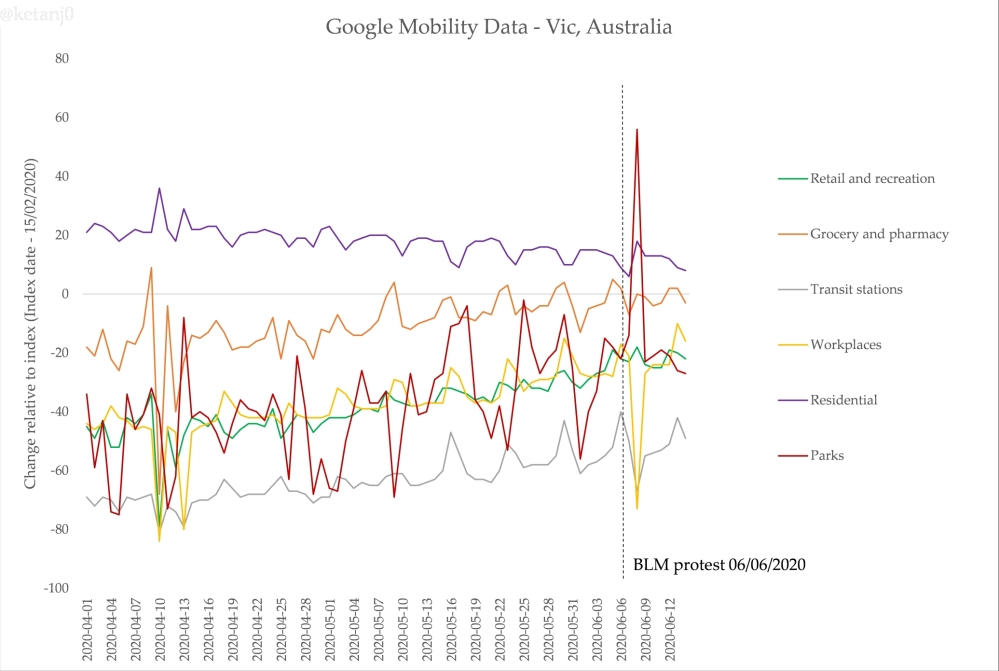 It’s the same story for the other states:

Australia has been going through a long, slow process of increased human movement since the commencement of the COVID19 lockdowns. This isn’t unusual. We can confirm this pattern using Apple’s mobility data too, which is slightly less problematic because it uses directions requests in phones rather than tracking, but that also makes it slightly less granular (hence why you don’t see a bump for walking for the protests). For Melbourne:

And for the other cities:

If you want the data files or the high-resolution images, just click here, and feel to use them (with attribution would be really nice).

This story is emerging from data in other countries, too. A working paper from private American non-profit National Bureau of Economic Research found that there is no “evidence that urban protests reignited COVID-19 case growth during the more than three weeks following protest onset”, and conclude that “predictions of broad negative public health consequences of Black Lives Matter protests were far too narrowly conceived”. They also find that protests may have even contributed to less movement in cities, though that’s unique in the context of America’s curfews.

The ‘protests cause attitude change’ theory is a lie, in that it is a claim that isn’t supported by any evidence, and contradicted by what evidence we do have. But there has been close to zero testing of the validity of the claim in media.

Alongside this, the effort to pin ‘protester’ labels on people diagnosed with COVID19 but who probably acquired it elsewhere and didn’t spread it at the rally continues. Sky News Australia literally lied in a story, claiming the virus was “spread” at the rally; something explicitly denied by authorities.

To be absolutely clear: @SkyNewsAust is *literally* and *actually* publishing a straight-up lie here. There hasn't been a single case of transmission verified at any #blm rally in Australia.

And Australia's CMO is helping that along – and failing to debunk or counter it. pic.twitter.com/zmMQ9qnYL9

To reiterate my previous post: this isn’t happening because people are clumsy or not smart enough to understand the data. The myth is emerging because people react to the sight of Indigenous Australians demanding the right to be heard with a racist anxiety, and scrabble wildly for purchase to find something that sounds reasonable, to give that anxiety some veneer of respectability.

COVID19 is perfect, for that. It’s a random scatter plot of vaguely related circumstance, and you can slice and dice the emergence of clusters to exercise whichever wildly ludicrous superstition you want to. Except, when the theory that 5G causes coronavirus sprang up, it saw hundreds of ‘debunk‘ and ‘fact check‘ style articles, When the conspiracy theory that anti-racist protests are causing coronavirus comes up, there is near-total silence. That is a clear message from Australia’s media outlets heard by non-white Australians.

This racist idea is largely unchallenged because the people who’d normally been rearing to debunk conspiracy theories and medical misformation stay quietly mute. They may not be quite as racist, but they’re racist enough to want to let these ideas fester without providing any counter.