Remember this time last year? Climate change was going nuts. Marches filled streets. As the decade closed, bushfires tore through Australia. Countries that thought they were too rich and white to feel climate impacts watched this deadly disaster and nervously changed their minds.

Things are different, now. There has been a drop in climate coverage everywhere in the world. After the 2019 bump, we’re back to background noise:

In 2020, that empty space has proven fertile ground for the Climate Edgelords. They identify as tacitly on the same team, but their efforts are solely directed at attacking their teammates. They are not good at it.

They sell themselves as persecuted truth-tellers, but they are amazingly bad at basic fact checking. They rebrand the consequences of their failure to grapple with complexity as proof of a conspiracy against their success. They tend to be aggressive, but feign peace and calm through gritted teeth. They are almost entirely middle-class white Gen X men. They are not climate change deniers, but they are funhouse mirror analogues of them, filtered through whichever ideology dominates.

They are having a real moment, in 2020. It’s exhausting. Let’s tie it all together.

Michael Shellenberger has, for years, advocated for nuclear power through a vaguely humanitarian lens; insisting that this technology is the only option for lifting people out of poverty and expanding wealth and influence across the world. In the early 2010s, that manifested as co-founding ‘ecomodernism’, a vaguely pro-technological, pro-prosperity climate worldview. Recently, he’s become fiercely anti-renewable energy, and contends that predictions of climate disaster are catastrophism and alarmism.

In promoting his new book with an error-ridden post on Forbes, he contravened the site’s self-promotion policy, and claimed Forbes were “censoring” him. He attacked a Guardian journalist who’d sent him questions about affiliations, and theorised the publication was against him because it takes advertising money from renewable energy. He also appeared several times on News Corp outlets in Australia, which all take fossil fuel advertising money. Neatly, he also did an interview with the Daily Mail, which the paper published alongside a huge ad for fossil fuel company Esso, along with a big picture of a petrol pump.

Stumbling in at second place in the luke-warmism awards of 2020 is Bjorn Lomborg, whose awful book release timing has resulted in a relatively muted response. Lomborg is a known quantity too, so the fabricated ‘ex-environmentalist turns around’ narrative doesn’t quite work. His contention is that climate change is real, but the problem is minor and exaggerated by ‘alarmists’. His tweets suggesting the same about coronavirus seemed to stop somewhere in April.

Some common threads to note:

Roughly, the line here is that we’ve gone past the point of no return already. Either the Earth’s climate system is too far gone to reverse, or people are so unchangeable that there’s no hope of reversing it, even if it’s technically possible. Often justified on the grounds that a failure to solve climate change in the past proves we’ll never solve it in the future.

Easily the biggest outbreak of this, this year, was the fifteen-years-in-the-making Youtube video ‘Planet of the Humans’, directed by a man named Jeff Gibbs, co-produced by Ozzie Zehner, and widely promoted by his friend, Michael Moore. The film badly botches the most basic levels of information about climate and energy (something that continues in interviews afterwards). Importantly, it promotes a doomist philosophy: that there is no longer any human influence on the climate, that collapse is inevitable, that population growth is too high, and that the only possible action is loudly announced grieving.

Almost every incarnation of doomism leans heavily on an intense and anxious insistence that everyone who doesn’t hold that position is an insatiable, growth-obsessed technophile, who believes that solely wind and solar power can “save us”. Literally nobody holds this view, not even a little bit, but this imaginary argument is performed to add some fabricated substance to an evidence-free position.

We're laughing @ Rapture ppl 2day. But we believe in things equally ridiculous. Wanna make a list? I'll start: Solar/wind power will save us

Like the ‘climate change isn’t really a problem’ guys, doomism draws huge support from conservative media, it leans on falsehoods, it loves conspiracy theories and narratives of ‘free speech’ and censorship, and it borrows heavily from climate denial.

Another popular instance is American author Jonathan Franzen, who wrote a widely-panned article saying essentially the same thing, in 2019. The very concept of ‘too late’ is a major misunderstanding of climate science. It is a “slope we slide down”, not a cliff we slipped off.

Co-founder of Extinction Rebellion, Roger Hallam, seems to sit somewhere on this spectrum too. After several XR groups explicitly dissociated themselves from him (he described the Holocaust as “almost a normal event … just another fuckery in human history”), he has gone to create a group named ‘Beyond Politics’, purportedly targeted at bringing down the UK government and replacing it with participative democracy (comprised of ‘citizens assemblies’). Hallam and his friends threw paint all over NGOs like Greenpeace, Friends of the Earth and Amnesty International, because they haven’t done enough to ‘bring down the government’.

In ordinary times we would not dream of throwing paint over the offices of @GreenpeaceUK and @AmnestyUK. But these are not ordinary times – these are the most extraordinary, fucked up times in the history of humanity. pic.twitter.com/psTUZFFV5e

‘Hah! We used your own tactics against you, because you’ve lost your way!’ isn’t original Michael Shellenberger ‘locked down’ in front of Greenpeace in 2016 – mad that the NGO wasn’t opposing the closure of the Diabo Canyon nuclear power station: 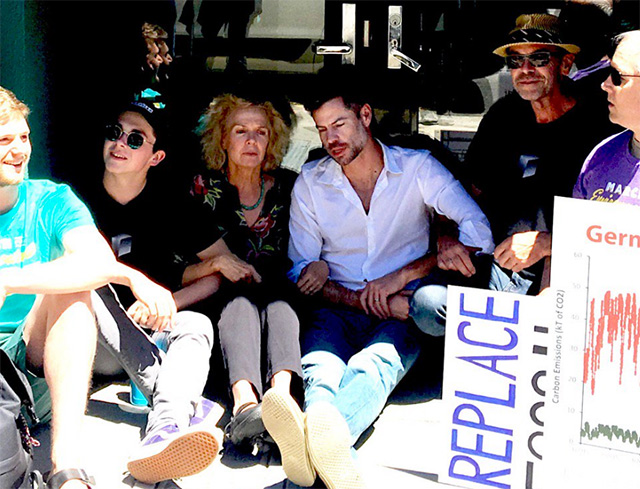 Of course, if Hallam spends a few years trying and gets nowhere, he isn’t going to have his front door splattered with pink goop. Planet of the Humans has been out for a few months now, and the climate crisis is still happening. Shellenberger’s plan for global nuclear domination hasn’t put a dent in the technology’s global decline. These efforts are not about doing; they’re about pulling on the tail of those who are trying.

Finally, there is one core narrative that crops up in both categories of Climate Edgelord. It’s race and racism. The anxiety around population growth often ignore the history of white supremacy and eugenics within such movements. Michael Moore and Jeff Gibbs urge people to join Black Lives Matter movements, but didn’t think they mattered enough to feature any of them as interviewed experts or commentators in their Youtube video. Conversely, Shellenberger claims unbridled nuclear power expansion is the only option for bringing countries like India out of poverty; as if asking them what they think isn’t really an option.

Climate edgelords thrive on treating the climate crisis like it has an on/off switch. If emissions are greater than zero today, every single environmentalist is classified as a failure.

The solutions put forward are always a vague, absolutist wish list stemming from their personal gripes, their own misunderstandings of the science of climate and energy and their ideologies. For Gibbs, you just need to cut down on the number of humans. For Michael Moore, you just need to erase capitalism. For Shellenberger, you just need to build a million nuclear plants. They all truly hate renewable energy, both because it generates too much energy and not enough energy, but they have no real clarity on the alternative they’re putting forward.

They hate the prominence of climate change. “Climate needs to have its importance diminished. It’s not the most important environmental problem in the world”, Shellenberger told the Heartland Institute. “Instead of climate change, we must at long last accept that it’s not the carbon dioxide molecule destroying the planet, it’s us”, intones Jeff Gibbs, in ‘Planet of the Humans’.

What are they complaining about? They got what they wanted. A pandemic has torn a massive hole in the middle of global climate action. It has frayed global agreement and it has frayed us too. It is the perfect time for those who feel reproachful anger at climate’s prominence to demand the spotlight turn back on them; and they’ll happily use anything in their arsenal to ensure it happens.