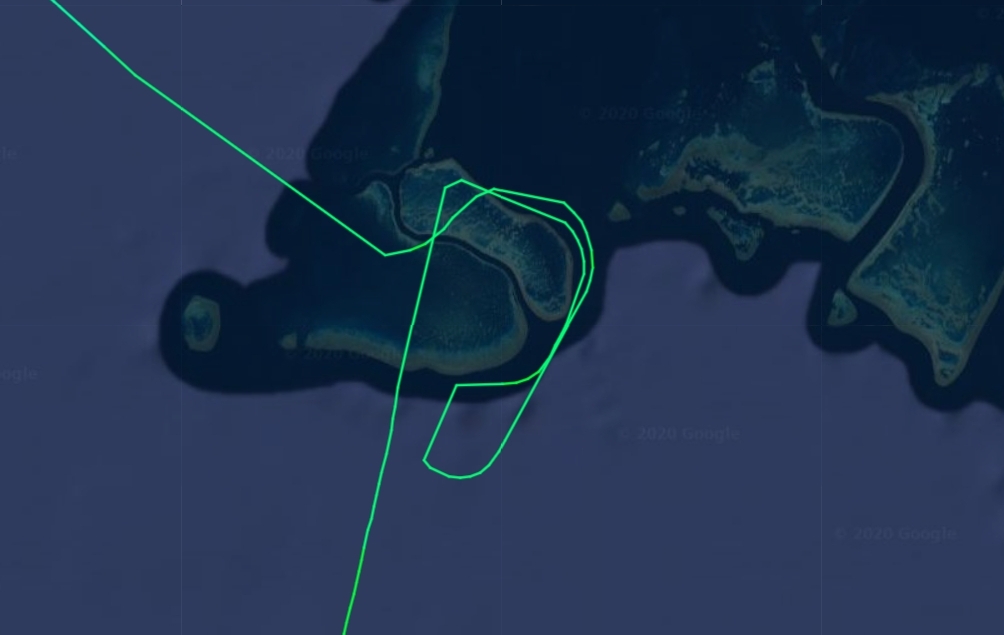 Recently, Australia’s biggest airline, Qantas, ran a ‘flight to nowhere’. It took off at 10:43 from Sydney airport, and landed at 19:08. The 8.5 hours of flight time came after a twenty minute test flight for the aircraft the day before.

“Relax in the sky in Qantas pyjamas as your flight makes its way around the country with a few surprises along the way”, promised Qantas, on its booking page. They sold six business tickets at $3787, 24 premium economy at $1787 and 104 economy at $787 (a healthy take of $147,458), apparently the ‘fastest selling flight in Qantas history’, with tickets gone within ten minutes.

The flight dipped down to Earth several times to allow the passengers to gaze upon Australia’s natural beauty. The second dip was over the Great Barrier Reef:

Importantly, the aircraft visited the area of the reef just east of Mackay and Airlie beach, far south enough that the impacts of climate change on the Great Barrier Reef could be mostly avoided:

Why yes, the human-caused release of greenhouse gases is causing the heating of the planet’s oceans and atmospheres, threatening to permanently kill off natural wonders. And yes, planes are caused by humans, and specifically, flights that take-off and land in the same spot are caused by humans.

By my reckoning, the just-under-nine-hours flight time associated with the event (including the testing of the aircraft) released about 156 tonnes of greenhouse gases (CO2 equivalent) into the atmosphere. For the 134 tickets sold, each can be attributed around 1.2 tonnes. Here are some countries where individual people emit less than that in one year:

That’s fifteen countries there, filled with people who on average emit less in one year than those passengers did in just under nine hours. A combined population of around 136 million.

You might recognise several Pacific countries fighting desperately for Australia to take climate change seriously, such as Kiribati and the Marshall Islands – severely threatened by the impacts of climate change and rising sea levels.

As you might expect, 156 tonnes is a blip on the global scale of emissions. But Qantas’ decision to run this flight instead of streaming some coral footage slow TV in their lounge serves as a horrifically literal representation of modern climate inaction.

2050 means nothing if it doesn’t change what happens today

“The Great Southern Land scenic flight will operate with net zero emissions – with carbon emissions from the flight 100% offset“, insisted Qantas, in their press release.

Offsets are problematic enough. Burning fossil fuels and then planting trees to re-suck the carbon released into the Earth is badly insufficient, because those trees tend to burn down in the climate-intensified bushfires tearing across the world. There are some ways to make these offsets more reliable, but they ought to be used only in limited circumstances, for unavoidable emissions (like a flight carrying medical supplies).

What Qantas – and the world’s companies – really ought to be doing is leaving fossil fuels unburned. The carbony remains of an old, dead compressed creature can remain safely under kilometres of crust. Once that thing is brought to the surface and burned in the bowels of a plane’s jet engines it’s free to cycle regularly and trap heat, even if you promise to trap an equivalent number in a collection of trees you promise to not cut down. Only 10% of Qantas customers opt in to carbon offsets, anyway – why is it opt-in, anyway? No, wait. I know the answer.

“These short-term actions will go towards a longer-term goal of being completely net carbon neutral by 2050. It’s ambitious, but achievable,” said Qantas’ CEO, Alan Joyce, in late 2019, describing a range of offsetting and low carbon fuel plans. Yep, they’re heading to net zero by 2050. So is OneWorld, the global network that Qantas is a part of.

Their journey to net zero is a Flight to Nowhere: taking off, cruising around at low altitude for a few hours, and landing in precisely the same spot they took off, all while lavishing their customers with frequent flyer points in the hope of growing their business and consequently increasing their emissions footprint.

Burning fossil fuels without even the thin pretence of unavoidable purpose – pumping out greenhouse gases purely for ‘joy’ – shows that these companies still, in their hearts, don’t consider the burning of fossil fuels to be a harmful act that must be avoided to protect life on Earth.

Can you imagine a greater fuck you than flying a pointless plane a few hundred metres above the world’s largest living structure as it gasps and dies due to carbon poison?

It’s 2020. Moustache-twirling fossil-funded climate deniers are old hat. The new hotness: companies and governments feigning climate action, while secretly working to worsen the problem. We’re beset with promises that they’ll stop hurting us and the world we love by the year 2050, as they keep the punches rolling. Until we see deep changes in attitude, we’ll know that for them, climate action is a flight to nowhere, and that their destination is precisely where they’re taking off from.